An engraving from self portrait of Elizabeth Elstob (Source: History Today).

Turbulent Londoners is a series of posts about radical individuals in London’s history who contributed to the city’s contentious past, with a particular focus of women, whose contribution to history is often overlooked. My definition of ‘Londoner’ is quite loose, anyone who has played a role in protest in the city can be included. Any suggestions for future Turbulent Londoners posts are very welcome. My next Turbulent Londoner is Elizabeth Elstob, known as one of Britain’s first feminists.

Elizabeth Elstob was a renowned Anglo-Saxon scholar at a time when the medieval period was not considered worth studying, and when women were not considered worthy of education. Like fellow Geordie Mary Astell, she has since become known as one of England’s first feminists.

Born in Newcastle-Upon-Tyne to a merchant family on the 29th of September 1683, Elizabeth was orphaned young, and raised by her uncle, Charles Elstob, in Canterbury. Depite disaproving of women’s education, he allowed the young girl to learn Latin and French. 10 years her senior, Elizabeth’s brother, William, was sent to Eton and Cambridge before joining the church, becoming a scholar as she was also destined to. He introduced the teenaged Elizabeth to a small group of Anglo-Saxon scholars.

From 1696, Elizabeth lived with William in Oxford, and moved to London with him as his housekeeper in 1702. William Elstob did not share the same reservations as his uncle, and in London Elizabeth had the freedom to learn Old English. The siblings encouraged and supported each other in their academic endeavours. Elizabeth used her brother’s scholarly connections and her own force of will to gain access to intellectual circles and resources that she would have otherwise been denied. Being in London also allowed Elizabeth to join Mary Astell’s circle of female intellectuals, who helped her find subscribers for her publications.

Elizabeth’s first major work was published in 1709, a beautiful edition of Abbot Ælfric of Eynsham’s tenth-century An English Saxon Homily on the Birthday of St. Gregory. In the preface, she argued for the importance of women’s education, using religious reasoning to support her arguments. He second major publication came out in 1715, and was entitled Rudiments of Grammar for the English-Saxon Tongue. It was the first such work to be written in English rather than Latin. This was a deliberate decision on Elstob’s part- she wrote in English so that her work would be more accessible to other women. It was not only women who appreciated her work, however; Thomas Jefferson owned a copy of Rudiments which he used to understand terms he came across during his legal studies. 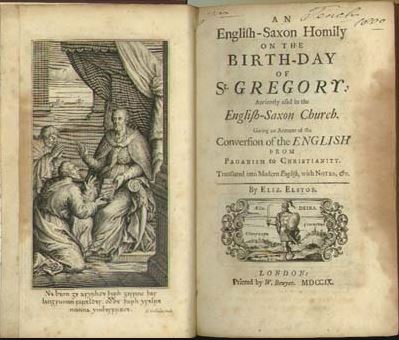 The title page of An English Saxon Homily on the Birthday of St. Gregory (Source: University of Glasgow Library Special Collections).

Unfortunately, William Elstob died in 1715, leaving Elizabeth homeless and with large debts from financing their expensive scholarly publications. She started a girl’s school in Chelsea, which proved very popular but did not make a profit- it closed after just six months. In 1718 Elizabeth fled London, abandoning her books and an unfinished manuscript of Ælfric’s Catholic Homilies, a project she had worked hard to finance. She moved to rural Worcestershire where she ran a small school under the assumed name of Frances Smith. It seems that no one in the scholarly community knew where she was for almost 20 years, until 1735. In 1738 she was given the comfortable position of governess to the children of the Duke and Duchess of Portland, and she remained in their service at Bulstrode Park, Buckinghamshire, until her death on the 3rd of June 1756.

Elizabeth Elstob must have possessed incredible determination and resolve to become such a well respected scholar, despite her unpopular subject area and particularly her gender. Sadly, without the support of her brother she was not able to overcome the odds that were so heavily stacked against her as a woman. Nevertheless, her brief scholarly career demonstrated what women were capable of given half the chance, and she used her influence to support the education of other women, a revolutionary prospect at the time.