This Monday, I went to a talk at the Birkbeck Cinema called Breaking the Peace: A Century of London Protest on Film given by  Professor Ian Christie, part of a series of events exploring London on film in association with the Raphael Samuel History Centre. Over the course of an hour and a half, Professor Christie showed us footage of the Suffragettes (1910-13), the 1926 General Strike, a 1932 Hunger March, the Battle of Cable Street (1936), Anti-Vietnam War protests (1968), the disruption of the 1970 Miss World competition at the Royal Albert Hall, the 2003 Anti-Iraq War demonstration, and Occupy London (2011). I had a great afternoon watching the footage, looking out for all the things that have (and haven’t) changed about protest in London over the last one hundred years. 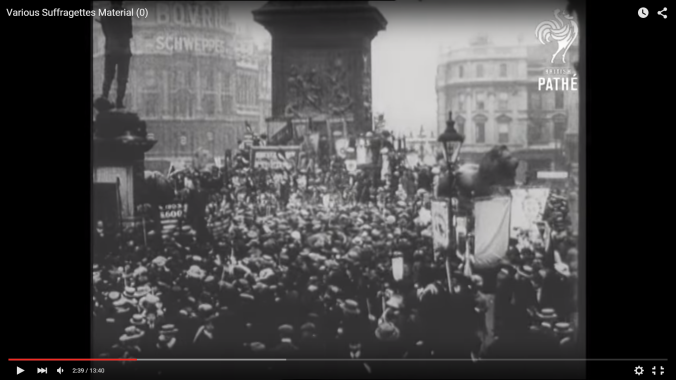 A National Union of Women’s Suffrage Societies (NUWSS) rally in Trafalgar Square. This is a still from newsreel footage owned by British Pathe, and is available on YouTube (Source: British Pathe).

Apart from fashion, one of the biggest changes that stood out was the development, and democratisation, of film technology. The afternoon began with grainy, silent, black-and-white newsreel footage,  and finished with colour and sound, probably filmed by amateurs with handheld cameras. As film technology has developed, it has also got cheaper, allowing wider excess. In the 1960s the new TV production company Granada started making World in Action,  a hard-hitting news programme that presented London protesters in a more balanced light than older, more established sources of news. By the 2010s, the Occupy movement were making and editing their own films, presenting themselves exactly the way they wanted. Organisers of protests want their message to reach further than the people who witnessed the protest directly, and the more control they have over the communication media that spreads that message,  the more successful they are likely to be in getting that message out.

A still from World in Action‘s coverage of the 1968 Anti-Vietnam War demonstration in London. The distinctive shape of the fountains makes it obvious that this is also Trafalgar Square. This video is also available on YouTube (Source: World in Action).

One thing which has not changed much is the language used by outsiders to describe protest. In almost every example there was the perception that a largely peaceful protest had been subverted by a small minority of ‘criminals’, ‘anarchists’, or ‘hawks’ (I particularly liked the Cold War terminology creeping in here). Protesters were also frequently described as ‘converging on London’, giving the impression of disgruntled Britons descending on the capital from all corners of the country. London is the political and economic centre of the country,  it is no surprise that it is chosen as the site of many national demonstrations.

A still from the BBC’s Witness series about the disruption of the 1970 Miss World Competition in the Royal Albert Hall (Source: BBC News)

The tactics of the demonstrators themselves has also remained largely the same. The content and methods of production may have changed, but banners and placards are still an integral part of protest marches, as is costume. The protest march itself has also changed little since the women of the suffrage movement proved it could be done with dignity and respectability. Scholars sometimes talk about ‘repertoires of resistance’- the specific set of tactics available to demonstrators to make their point. These repertoires are often shared between and within communities, including on a national scale. This means that many protests utilise similar strategies. There is also a tendency to take inspiration from what came before; the anti-Vietnam demonstrators may have mimicked the successful strategies of the Suffragettes, for example.

A still from a YouTube video about the demonstration against the Iraq war in 2003 (Source: Kino Kast).

Another constant throughout the films was London itself. Both Hyde Park and Trafalgar Square are described in the newsreels as ‘the home of free speech’, and landmarks such as Nelson’s Column act as a familiar backdrop to events. London is no stranger to protest. Due to its role as the political and economic centre of Britain, the city is full of buildings which can act as symbolic stand-ins for intangible power structures (the Houses of Parliament, the Bank of England, and foreign embassies are some examples). The fact that places like Hyde Park have become known as the home of free speech also attracts more protest groups, reinforcing the city’s reputation for protest.

A still from a film made by Occupy London about the protests outside St. Paul’s Cathedral in 2011 (Source: Conscious Collective).

The purpose of this series of events organised by the Raphael Samuel History Centre and Professor Ian Christie was to think about how film can be used for research. There is a vast amount of film of London protest available, much of it more accessible than ever thanks to resources such as YouTube. Whilst it is important to be wary of possible biases (the early newsreels are almost entirely concerned with the preservation of law and order), film is a perfectly viable source to use for investigating historical research. It’s just a shame half of my case studies occurred before the invention of film!