Attack on London by Jonathan Oates

Out of all the high street chains of bookstores, I have a particular fondness for The Works. If you’ve never come across one before, it’s a sort of outlet store for books and stationary, and I can rarely resist having a browse when I walk past one. I have found numerous bargains in there over the years, including Attack on London by Jonathan Oates.

Dr. Jonathan Oates is the Ealing Borough Archivist and Local History Librarian, but he has also published numerous books on London’s history, particularly its more criminal elements. In Attack on London Oates, inspired by the 7/7 bombings, traces how Londoners have reacted to tragedy, shock, and trauma. Starting with the Peasant’s Revolt in 1381, Oates documents some of the most severe hardships faced by London, including the Great Plague (1665-1666), the Gordon Riots (1780), the Clerkenwell Outrage (1867), Bloody Sunday (1887), aerial bombing during both World Wars, IRA bombings during the 1970s, and the 7/7 bombings in 2005. Oates concludes by arguing that such dramatic events bring out both the best and the worst of Londoners; there has been resilience, bravery, and unity, but also looting and xenophobia.

If you are familiar with London’s history, then there probably isn’t much in Attack on London that will be new to you, although I was surprised to learn about the extent of aerial bombing on the capital during the First World War. However, the way the which Londoners reacted to these well-known events is a new angle, which brings together disparate events such as riot, war, disease, and fire in an interesting way. Oates’ referencing style is not very detailed, so it is difficult to identify the exact sources of his work, but it seems to be a well-researched book.

There are some elements of Attack on London that feel a little ‘amateur’. For example, each chapter ends with a conclusion identified as such with a subheading. This feels a little out of place in a history book aimed at a popular audience. Also, one of the photos reproduced in the book, of a plaque commemorating the deaths of 77 people in an air raid bombing in Southwark in October 1940, is blurry. I know I’m being picky, but little things like these combine to give a general impression of not-quite-finishedness that could have been so easily avoided. In addition, the book commits one of my biggest personal faux pas; putting all of the images on a few glossy pages in the middle of the book, and not referring to them in the main text. I know that lots of books have their images arranged in such a way, I guess it is an effective or cost-efficient way of illustrating books. I can understand that, although I would prefer to have the images close to the relevant text. However, when the author does not refer to the images in the text, then they become almost pointless, as they do not serve to back up or illustrate a particular point. Attack on London is by no means the only book that does this, but it winds me up nonetheless.

Because I found Attack on London in a bargain bookshop, it cost me quite a bit less than the £19.99 recommended retail price, which is a bit steep, in my opinion, for what you get. Nevertheless, it is an easy-to-read, engaging reflection on the best and the worst facets of Londoners. 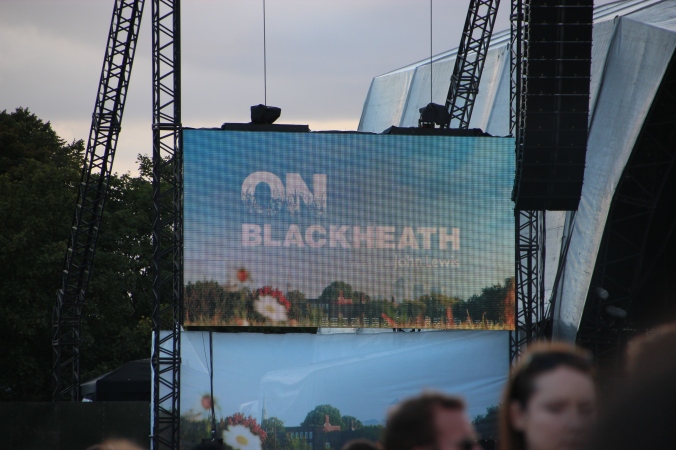 The On Blackheath festival took place on the 12th-13th September 2015, on Blackheath in south east London.

Last weekend, I went with my Mum and sister to the On Blackheath festival which is, funnily enough, on Blackheath in south east London. Shared between the boroughs of Lewisham and Greenwich, it is one of the largest areas of common land in London today. It is a fantastic setting for a family-oriented festival; when it gets dark you can see the lights of the towers in Canary Wharf glinting from across the river. But Blackheath is ancient, going back at least as far as the Doomsday Book, and it has hosted countless other gatherings of a more turbulent nature.

The festival has a laid back, family friendly atmosphere, but not every gathering on Blackheath has been so pleasant.

The common land of London has always played a role in the life of turbulent London, hosting many a protest and political meeting. Before the Gordon Riots in 1780 the Protestant Association held a mass meeting in St. George’s Fields, the area of modern day Waterloo and Lambeth. In 1848 the Chartists held a rally on Kennington Common (all that remains of which is the Oval cricket ground) which did not go their way and effectively ended the Chartist movement. The similarity between St. George’s Fields and Kennington Common is that they no longer exist. Blackheath does, and when you go there you can imagine standing in the footsteps of famous radicals.

The Manic Street Preachers performing at the On Blackheath festival 2015.

So when I was standing on Blackheath on Saturday night, listening to the Manic Street Preachers performing “If You Tolerate This Your Children Will Be Next,” which is inspired by the 1936 Spanish Civil War, I got thinking about Blackheath’s radical history. The Manic Street Preachers are not afraid to be political in their performances, and they may not have realised it but they were continuing a strong Blackheath tradition by doing so at On Blackheath. During the 1381 Peasant’s Revolt, and the 1450 Kentish Rebellion both used Blackheath as a rallying point. Wat Tyler, the leader of the Peasant’s Revolt, is commemorated by Wat Tyler Road, which runs across the heath. After camping on Blackheath, Cornish rebels angry at a war tax imposed by Henry VII were defeated at the Battle of Deptford Bridge (otherwise known as the Battle of Blackheath) in June 1497.

In the middle of Blackheath is a mound of earth called Whitefield’s Mount (or Whitfield’s Mount/Mound), which at one point was known as Wat Tyler’s mound because it was used for making speeches during the Peasant’s Revolt. One of the speakers was John Ball, who uttered that well-known statement of equality:

When Adam delved and Eve span, who was then the gentleman?

He didn’t necessarily make this speech on Whitefield’s Mount, but wouldn’t it be great if he did? It has been speculated that the Mount is the final resting place of some of the 200-2000 Cornishmen killed during the Battle of Deptford Bridge. True or not, Whitefield’s Mount is clearly intimately linked with London’s turbulent past. 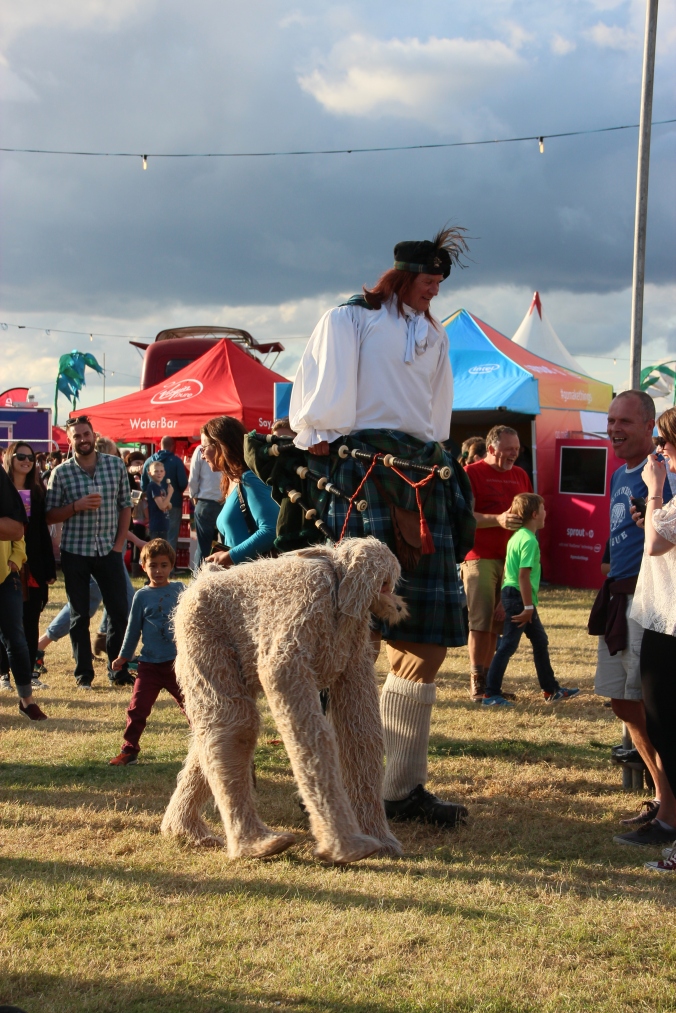 Street performers at the On Blackheath festival. The Cornish Rebellion in 1497 was started when King Henry VII raised taxes to fight a war with the Scots.

By the 1830s and 40s, radicals were addressing a new set of issues, and the Chartists had began using Blackheath as a location for meetings as part of their campaign for universal male suffrage. Almost a hundred years later, it would also be used for meetings calling for female suffrage. More recently, Blackheath was used in 2009 for a week-long climate camp, complete with compost toilets, and a pedal-powered radio station and TV channel. In 2013, there was a protest against Zippo’s Circus who were set up on Blackheath, one of the few UK circuses that still use animals in their performances. Even the On Blackheath festival itself has been the subject of protest, with anarchist Ian Bone objecting to common land being fenced off for a ‘foodie fest’ that was not accessible to the poor communities in surrounding areas.

London’s open spaces play a vital role in the city’s life by hosting gatherings of all kinds. From festivals to protests, they are a key part of the social, political and cultural life of the city. London’s 2000+ year history means that almost anywhere you go in London will have been the site of past protest of some sort, but areas of common land have been particularly contentious, and Blackheath is no exception. By performing songs such as “If You Tolerate This Your Children Will Be Next,” the Manic Street Preachers were both drawing from and continuing a tradition of dissent on Blackheath that stretches back hundreds of years.

Turbulent Londoners is a series of posts about radical individuals in London’s history who contributed to the city’s radical and contentious past. My definition of ‘Londoner’ is quite loose, anyone who has played a role in protest in the city can be included. Any suggestions for future Turbulent Londoners posts are very welcome. First up is Lord George Gordon, a charismatic individual who played a big role in the Gordon Riots.

Lord George Gordon was an eccentric, irresponsible, but charismatic aristocrat who probably would have faded into obscurity if it wasn’t for the Gordon Riots, to which he gave his name. The Riots, which took place in June 1870, were a week-long series of anti-Catholic disturbances which have been called “the most serious disturbances ever seen in London.” (German and Rees, 2012; 87). Sparked by Parliament’s refusal to consider a petition to repeal the 1778 Catholic Relief Act, the riots took on a distinct anti-establishment flavour in their later days, which terrified those in authority.

Although charged with high treason after the riots, it seems that George Gordon did not intend to spark such dramatic events, which involved the largest number of people killed or executed in an episode of civil disorder either before or since (Archer, 2000). Becoming an MP with a reputation for rambling, boring speeches in 1774, Gordon was elected president of the London Protestant Association in November 1779. The Association was an organisation with the goal of repealing the Catholic Relief Act, which had relaxed some of the restrictions on Catholics in Britain.

Gordon and the Protestant Association organised a petition containing up to 100,000 signatures demanding the act be repealed. Against the advice of the rest of the Association’s leadership, Gordon called for a rally on the 2nd of June, followed by a march to Parliament where he would present the petition. An estimated 60,000 people attended, an unprecedented amount for a political meeting at this time (Bloom, 2010). The same evening that the petition was presented, two Catholic chapels were burnt down by an anti-Catholic ‘mob’. Over the following nights, the houses of many wealthy Catholics were destroyed, as well as the Langdale distillery and most of the capital’s prisons, including the infamous Newgate. Calm was not restored until the 10th of June, a week later.

A contemporary image of the destruction of Newgate, published in 1781 (Source: Guildhall Library, 941 JAC, The Gordon Riots- A Collection of Contemporary Documents Compiled by Judith Kazantis; Photo: author’s own).

At first suspected of deliberately engineering the riots, Gordon’s failed attempts to calm the situation proved he had no control over the rioters. He was acquitted of high treason, but continued to loudly voice his controversial and provocative opinions. He converted to Judaism in 1787, and was eventually imprisoned for libel following publications criticising transportation to Botany Bay as a method of punishment, and insulting Marie Antoinette, the Queen of France. He died of gaol fever in Newgate on the 1st of November 1793.

Lord George Gordon was admired by some, and considered insane by others. Whilst he was progressive in some of his views, for example his strong opposition to the death penalty, his hatred of Catholics complicates an interpretation of him as a radical reformer. However he is viewed, Gordon was a fascinating individual, who contributed to the history of disturbance in the capital, making London that bit more turbulent.