Londonopolis: A Curious History of London by Martin Latham.

To call Londonopolis: A Curious History of London a ‘history’ of London is, I think, a bit of a misnomer. It is a well presented book, full of fascinating facts about the city, but it is not a comprehensive narrative of London’s story. It is arranged chronologically, but if this was the only book you ever read about the city’s past then your knowledge would be patchy at best. To be fair, Latham doesn’t claim to be comprehensive; he has tried to “open a magic casement or two onto different moments of London’s past” (Latham, 2014; 11).

That’s not to say I didn’t enjoy Londonopolis. It makes a refreshing change from some of the other books about London’s past, which can be a little dry and repetitive. The facts Martin Latham has included are very interesting; for example, did you know that the British practice of driving on the left comes from London Bridge? During Tudor times it was decided that people would enter London on the left, and leave on the right, to reduce the chaos on London’s only bridge across the Thames.

As a boy, London was a fairy-tale city to me. The other tenants in my house (apart from us eight kids and my parents) were a female spy, a fading actress, a newly arrived Irish family and the mysterious Miss White, a Dickensian spinster… I used to walk for hours randomly across London and it never disappointed…History was all around in such a way that I got temporal vertigo, that sensation of suddenly seeing the past as a reality.

Latham’s love for the city is infectious. In fact, I feel that the best sections of the book are the ones where he talks about his own life in London. The paragraphs about the various bookshops he has worked in, and his father’s skill as a water diviner, are lovely. Latham captures beautifully the magic of living in London.

Like A.N. Wilson’s London: A Short History, Latham spends a lot of time talking about individuals who have shaped London, focussing especially on creative types- writers and artists. Latham does a better job than Wilson of including London’s notable women however. Turbulent Londoners like Eleanor Marx, Annie Besant, and Sylvia Pankhurst get a whole chapter to themselves. Virginia Wolff, and Dorothea Bate and Joan Proctor (both dedicated scientists at the National History Museum) are also featured. There is also a chapter dedicated to the pioneering fashion designers Mary Quant, Barbara Hulanicki, Lee Bender, and Vivienne Westwood. 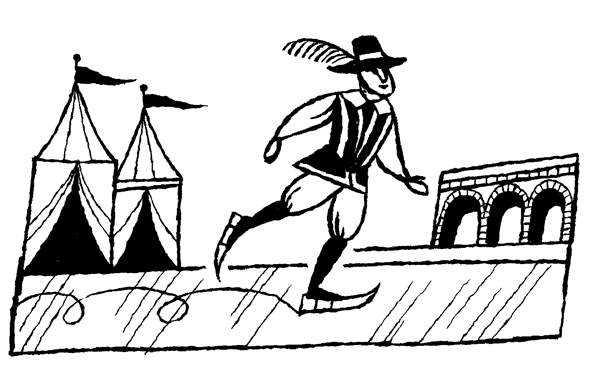 One of the simple but effective illustrations from Londonopolis.

Londonopolis: A Curious History of London is different to the books I normally review on  Turbulent London. It is not necessarily supposed to be read cover to cover, Latham himself says “You can read this book in any order, or leave it in the lavatory for the occasional reverie” (Latham, 2014; 11). In fact, reading it cover to cover feels a bit disjointed. I would recommend the book however, particularly if you like obscure but interesting facts, or need a gift for a London-lover. It takes an irreverent but affectionate approach to London, which I like.