Turbulent Londoners is a series of posts about radical individuals in London’s history who contributed to the city’s contentious past, with a particular focus of women, whose contribution to history is often overlooked. My definition of ‘Londoner’ is quite loose, anyone who has played a role in protest in the city can be included. Any suggestions for future Turbulent Londoners posts are very welcome. To celebrate the centenary of the Representation of the People Act, all of the Turbulent Londoners featured in 2018 will have been involved in the campaign for women’s suffrage. Next up is Rosa May Billinghurst, known at the time as ‘the cripple suffragette.’ 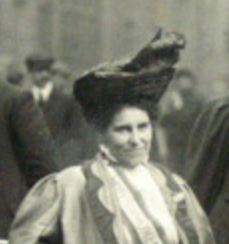 Rosa May Billinghurst was born on the 31st May 1875 to a well-off middle class family in Lewisham, south east London. She suffered with polio as a young child which left her unable to walk; she wore leg irons and used crutches or a modified tricycle for the rest of her life. This would not prevent her from throwing herself headlong into the campaign for women’s suffrage however. In fact, she often used her disability to the advantage of the cause.

As a young women Rosa volunteered with the poor in Greenwich, taught Sunday School, and was a member of the Band of Hope, a charity which taught children about the benefits of sobriety and teetotalism. She was also a member of the Women’s Liberal Association, although she later rejected the Liberal Party because of its approach to women’s suffrage. Rosa came to believe that women’s inferior position in society held back society as a whole.

Rosa joined the Women’s Social and Political Union (WSPU) in 1907 and took an active part in marches and demonstrations despite her limited mobility. In 1910, she founded a Greenwich branch of the WSPU and served as its Secretary. On the 18th of November, she took part in the demonstration that would become known as Black Friday. The demonstration was organised to protest the government’s abandonment of the Conciliation Bill, which would have given about one million of the wealthiest women the right to vote. The police used excessive force in quelling the demonstration, arresting 119 people, and assaulting many more. In a pattern that would become familiar to Rosa, police officers threw her out of her tricycle and sabotaged it, leaving her unable to move. Unfortunately, this behaviour was echoed by police officers almost a century later, when Jody McIntyre was pulled from his wheelchair twice during the Student Tuition Fee Demonstrations in 2010. 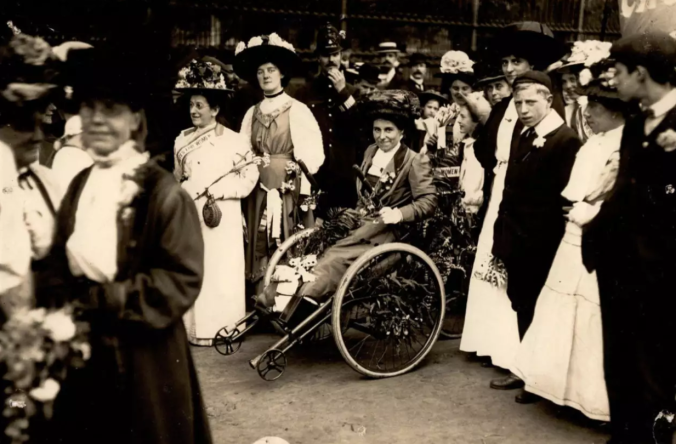 Rosa and her adapted tricycle at a Votes for Women demonstration (Source: LSE Library).

Rosa used her tricycle to its full advantage however. During demonstrations, she would decorate her tricycle with coloured ribbons and WSPU banners. During confrontations with the police, she would place her crutches on either side of the tricycle and repeatedly charge at police lines, happy to use herself as a battering ram. She was also known to hide the tools of the suffragette’s trade–stones for smashing windows and packages of thick brown liquid for pouring into post boxes and destroying letters–under the blanket that covered her knees. In addition, Rosa was fully aware of the publicity she could attract as a disabled suffragette; it was very difficult to portray her in a negative light without seeming particularly callous.

In March 1912 Rosa took part the WSPU’s campaign of mass window smashing. She was sentenced to one month’s hard labour for smashing a window on Henrietta Street. The sentence caused confusion amongst prison authorities, who did not know what kind of labour she could be put to. In December, she was caught sabotaging post boxes in Deptford, also part of a wider WSPU campaign. She was apparently glad to be arrested, believing that it would finally get the media attention the campaign had been trying to achieve. Rosa was sentenced to 8 months in prison. She went on hunger strike, and the subsequent force-feeding had such an effect on her health that she was released after two weeks.

Despite this traumatic ordeal, Rosa continued to participate in direct action. On the 24th of May 1913, she chained herself to the gates of Buckingham Palace. The following month, on the 14th of June, she took part in Emily Wilding Davison’s funeral procession. Emily had died after attempting to attach a Votes for Women sash to the King’s horse during the Epsom Derby, and she was celebrated as a martyr for the cause. 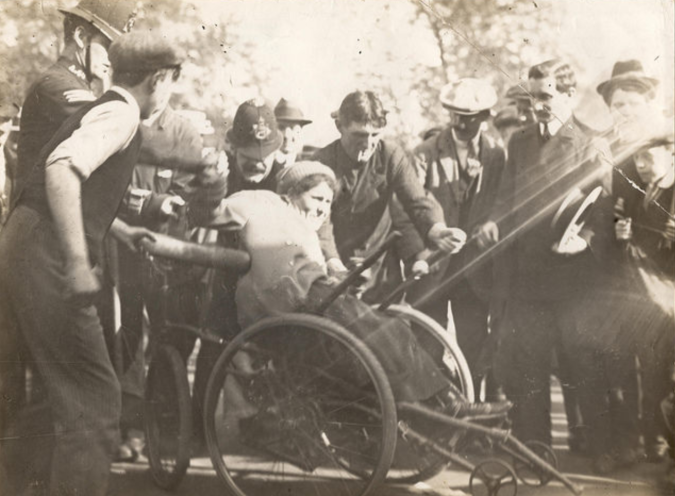 Emmeline and Christabel’s decision to suspend WSPU campaigning at the outbreak of the First World War in order to concentrate on the war effort was a controversial one. Rosa joined the Women’s Freedom League, who continued to campaign, suggesting that she didn’t personally agree with the Pankhurst’s decision. However, she remained loyal to the Pankhursts and the WSPU, helping in Christabel’s 1918 election campaign in Smethwick as the candidate for the Women’s Party. Emmeline and Christabel had founded the Women’s Party when the dissolved the WSPU in November 1917. Christabel lost, but only by 800 votes.

Rosa withdrew from activism after the passage of the Representation of the People Act in 1918. During her time in the WSPU, however, she was a fierce campaigner who used her disability to the best possible advantage.