Poppies in a rocket (2017) by Anonymous. One of the pieces on display at the Art the Arms Fair exhibition (Photo: Hannah Awcock).

Every two years, the Defence and Security International exhibition, known colloquially as the DSEI arms fair, takes place in the vast ExCel Centre in East London. People come from all over the world  to see and purchase the latest weapons and defence technology at one of the world’s largest arms fairs. Every year, there are protests attempting to stop, disrupt, and draw attention to the event. This year, at the same time, the 12th-15th of September, a very different kind of exhibition also took place in East London, with the aim of raising awareness of the DSEI, an event which most Londoners have no idea exists. The Art the Arms Fair exhibition took place at SET Studios in Capstan House in Poplar. It was preceded by an art event on the 9th of September at the ExCel Centre, where artists produced works in a variety of mediums. The exhibition displayed art that responded to the arms trade. Events, such as spoken word and comedy, were held in the space in the evenings. Works were sold to support the Campaign Against Arms Trade (CAAT), an organisation which aims to end the international arms trade. I have always been a little sceptical about the significance and power of art, so I went along to see if I could be convinced.

To begin with, SET Studios is not your typical art gallery. SET is an initiative that provides artists with affordable studio and project space in buildings that would otherwise be empty. Capstan House is a stylish new office block, with an imposing foyer and fancy elevators. SET occupies the seventh floor, with beautiful views across the Thames to the O2 arena and the Emirates Airline Cable Car. You can see the artists’ studio space through the glass walls that are so fashionable in modern offices. The art, some of it attached haphazardly to plywood display boards, sits oddly in this environment. But none of that detracted from the effect the exhibition had on me. In fact, it might well have contributed to the disconcerted feeling with which I left the exhibition.

Capstan House in Poplar, the location of  the Art the Arms Fair exhibition (Photo: Hannah Awcock).

The Art the Arms Fair was not housed in what I would describe as a typical art gallery space, but I think that only added to its impact (Photo: Hannah Awcock).

As I said at the beginning of this post, I am not a great believer in the power of art. I did not need to be convinced that the arms trade was a bad thing; I was already a strong believer in the futility and cruelty of war. But I left the exhibition feeling a lot more emotional than I expected to. Whilst I thought some of the artwork was good, I think what really affected me was the opportunity to ‘Make Your Own Art’ on blank postcards. Attempting to focus my response to the arms trade on one small rectangle of white card clarified and crystalised my feelings in a way that I was not expecting.

The ‘Make Your Own Art Section’ of the exhibition. The piece suspended from the ceiling is Half scale Tomahawk missile by Joseph Steele (2017). I think this is what made me connect with the exhibition so much (Photo: Hannah Awcock). 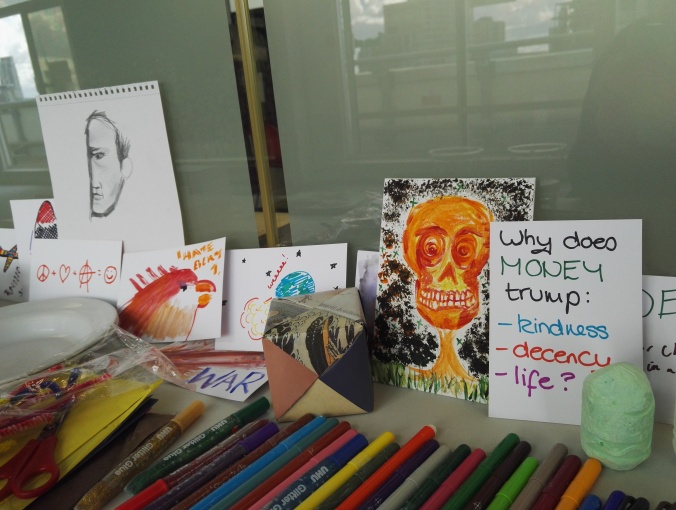 Some of the art produced by visitors to the exhibition (I’m not going to say which one is mine!) (Photo: Hannah Awcock).

The Art the Arms Fair exhibition was powerful and emotive. It’s main stated goal was to make the DSEI arms fair visible, to make people aware of its existence. It would be hard to say how far that goal was achieved; the exhibition was nowhere near the ExCel Centre, and the area didn’t seem like the kind of place that people just pass through, so it was unlikely to attract many people who didn’t already intend to visit. I do wonder if an art exhibition in an out-of-the-way office block in East London is really the best way to raise the profile of the DSEI. Nevertheless, it hopefully raised some money for CAAT, and provided a space for creative opposition to the arms trade. At the end of the day, I am reluctant to criticise anyone who is attempting to make a positive difference in the world, as doing something is very often better than doing nothing.

Cities are too often bleak places to live in and a mural is one way of making them more attractive and human.

The East End can boast a large number and variety—in sharp contrast to the lack of art galleries in the area.

I have recently been doing some research on the Cable Street Mural in the Tower Hamlets Local History Library and Archive (which is, by the way, a lovely place to work- the staff are very helpful). The Mural is located on the west wall of St. George’s Town Hall in Cable Street, and was completed in 1983. It is over 3,500 square feet, and it commemorates the Battle of Cable Street, which took place in the area on the 4th October 1936. Demonstrators clashed with police as they tried to clear a route through the East End for the British Union of Fascists to march. The march was called off, and ‘They Shall Not Pass!’ the demonstrators’ slogan, has become a catchphrase of anti-fascist movements of all kinds.

The Cable Street Mural on the side of St. George’s Town Hall.

Detail of a policeman fighting with protesters in the Cable Street Mural.

When doing archival research, it is not uncommon to get distracted by not strictly relevant, but still very interesting, material. I discovered that the East End does indeed seem to have a strong tradition of street murals, and the Cable Street Mural is not the only one with radical subject matter. London is perhaps not the first city that springs to mind when you think of politically motivated murals- Belfast or Dublin might seem more obvious. London does not like to be outdone however, and political murals do exist here if you are willing to look for them.

Sadly, there are not as many protest-themed murals in East London as there used to be. The Peasants Revolt mural, previously located in Bow Common Lane, was unveiled in 1981 to commemorate the 600th anniversary of the Peasant’s Revolt. The peasants had camped in Mile End on their way to London to demand reduced taxation, an end to serfdom and the removal of the King’s senior officials and law courts. Richard II did not meet their demands, but it remains a well-known period in English history. The mural was designed by Ray Walker, who was one of the three artists who took over from David Binnington when he resigned from the Cable Street Mural project in 1982. I have not been able to find out exactly when or why this mural was removed, and why it wasn’t afforded the same protection and investment that the Cable Street Mural has. The Cable Street Mural has been repaired every time it has been vandalised, and was restored in 2011 to mark the 75th anniversary of the Battle. 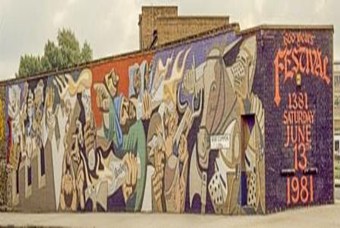 One radical East End mural which can still be seen today is that commemorating the Poplar Rates Rebellion. Located in Hale Road in Poplar, the mural was completed by Mark Francis in 1990, and restored in 2007 by David Bratby and Maureen Delenian with help from local children. In 1921 30 local councillors were sent to prison after refusing to collect the rates from residents because they were unfair. The mural tells the story of the Rebellion in 4 panels, mainly using words. It does include an image of the well-known political radical George Lansbury, and local residents holding placards that declare ‘Can’t Pay, Won’t Pay.”

The East End has a strong tradition of radicalism and protest, but a lot of it is not well known. Murals and other forms of public art are a good way of ensuring that historical protests are not forgotten. The Cable Street Mural in particular still draws visitors, and its striking colours and imagery are well worth going to see for yourself. If you have a few spare hours, why not go and check out these memorials to the East End’s turbulent history?

Stickers are a ubiquitous part of the urban environment, often more common than graffiti in city centres. They are quick, easy and cheap to produce and put up, so they are an effective way of getting a message across. They are employed for a variety of purposes, such as advertising, art and dissent. The meaning of many is not obvious, they remain indecipherable to all but the author and those with the right knowledge to decode them. They also come in many shapes and sizes, with many different techniques used to produce them. Like graffiti they are meant to be ephemeral, gradually disintegrating under the weight of the weather, idle hands and cleaners. As I move around London I photograph many of the protest stickers that I see, gradually building up a map of dissent in our capital. Below are some of the stickers I have seen. 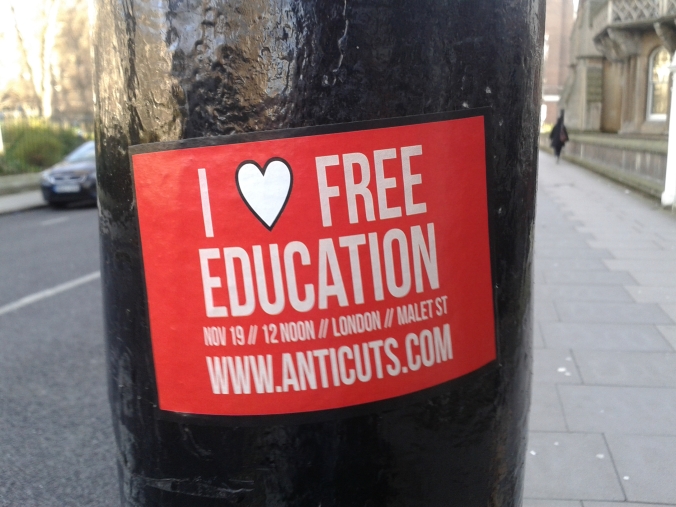 A free education sticker outside of the University of London Union building in Malet Street on 17/02/15.

Occupy Parliament Square Sticker seen on the 02/02/15 at King’s Cross Station. This sticker has been weathered, picked, and written on- demonstrating how protest stickers can spark political debate. 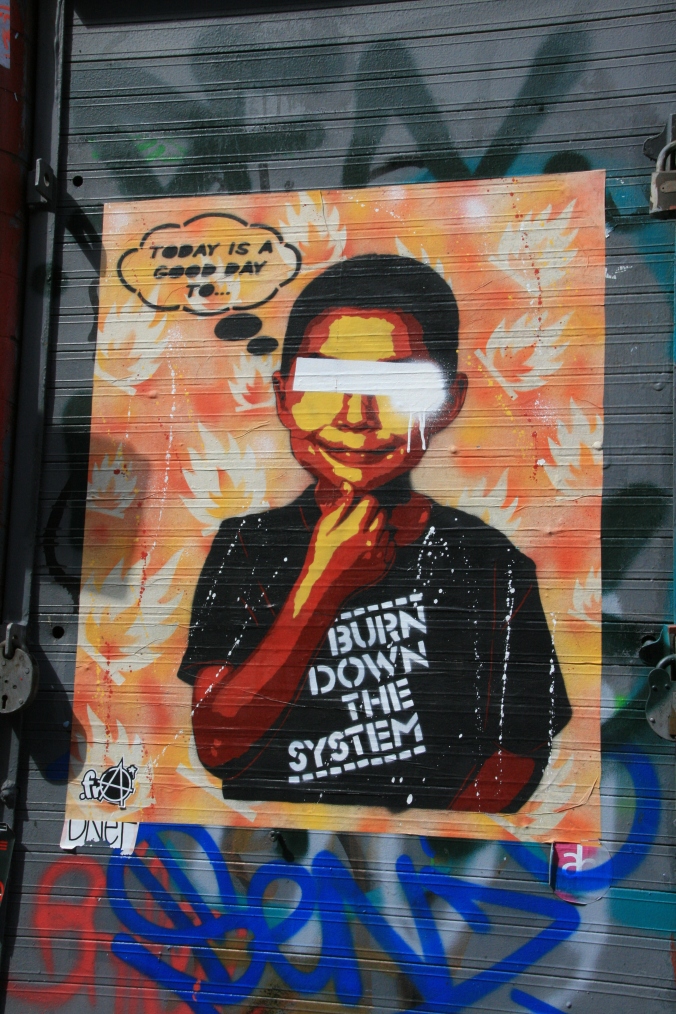 Some stickers are printed, whilst others look more handmade, like this one seen in Brick Lane on 05/06/14.

Some stickers advertise a particular protest, like this one in Malet Street, seen on 17/02/15.

Not all protest stickers are left-wing, like this one seen at Euston Station on 14/11/14.

Something as simple as speech bubbles can drastically alter meaning, as with this government advert, seen on 04/02/15 in Elephant and Castle. These stickers allow a sort of audience participation, so others can add more tax dodging companies.

This sticker has creatively recycled a page from a book to oppose Israel. Seen in Soho on 31/12/14. 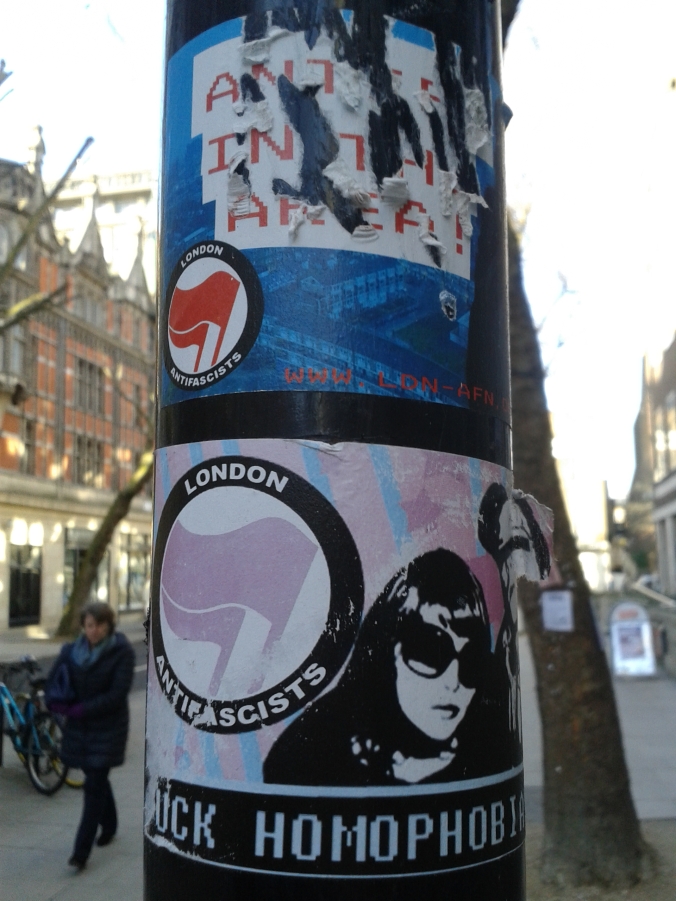 Protest stickers are particularly common in some areas of the city, such Malet Street in Bloomsbury, where the University of London Union building is. This photo was taken there on 17/02/15.

Some stickers can be seen in multiple locations across the capital. This photo was taken outside the Inner London Crown Court in Southwark, but it has also been seen at Euston Station.