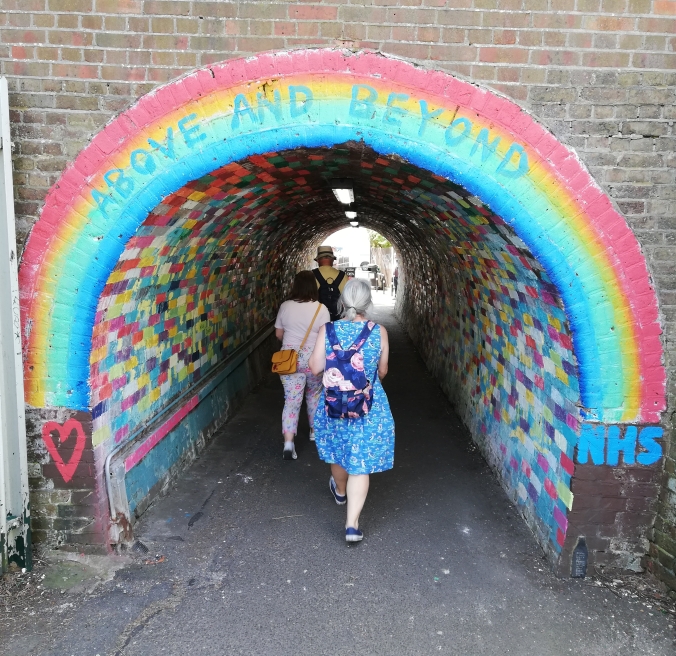 A recent addition to the railway tunnel at Aldrington Station (Photo: Hannah Awcock).

Since the start of the UK Lockdown in late March, I have being staying at my family home in Portslade, a suburb of Brighton and Hove. I used my daily exercise to do a lot of walking around Hove and Portslade, and as the weeks went on I started to notice more and more Lockdown-related ‘things’ appearing on the streets. First of all rainbows and messages of support for the NHS started appearing in people’s windows, then things began to appear in people’s front gardens and on the streets. Ranging from images and messages chalked, pasted or taped to pavements, walls, and lampposts to objects such as painted pebbles, bunting, and cuddly toys. I have been photographing protest stickers for a while now, and I am interested in the ways that people use public space to communicate with each other. So I started taking photos of Lockdown artefacts too. Below are some of the photos, and some thoughts on why people might be doing this kind of thing.

The idea of putting drawings of rainbows in your windows for children to count whilst out for exercise caught on early in the Lockdown. This is my Mum with the rainbow she drew. Rainbows have since become a symbol of the nation’s gratitude to the NHS. This has caused some controversy amongst the LGBTQ+ community, as some fear that their association with the rainbow is being overwritten (Photo: Hannah Awcock).

Painted pebbles have become another common sight during the Lockdown. Items like this can be a way to reach out and connect with people at a time when the normal ways of connecting are closed off to us (Photo: Hannah Awcock)

This giant angry bird appeared overnight. I think it is connected to a trend of putting teddy bears in your windows for children to spot when they passed by. This didn’t seem to catch on as much as the rainbows, but in Portslade it went even further, with teddy bears being tied to lampposts, benches and railings all over the place. There does seem to have been some local variation in terms of which kinds of artefacts are popular (Photo: Hannah Awcock).

Seeing loads of teddy bears tied to lampposts by their necks can actually be a bit creepy, but this Pingu looks happy enough with the situation! (Photo: Hannah Awcock).

Another motivation for leaving artefacts such as this on the streets could be a desire to make people smile in these difficult times. Crafting has become incredibly popular during the lockdown, whether is painting and drawing or baking. It could be that people have more time to practice their hobbies at the moment, but I also think that activities like this can be therapeutic, and we all need a way to relax right now (Photo: Hannah Awcock). 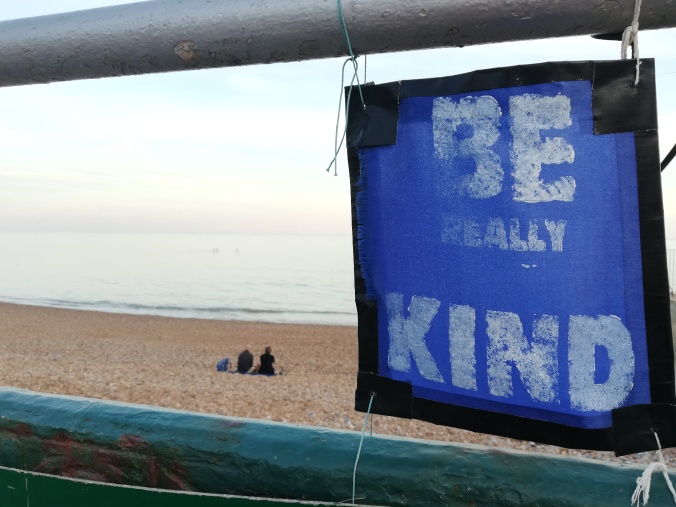 The idea of being kind seemed to be gaining traction before Lockdown began, but it has really gathered pace over the last few months. I have spotted this sign in various places around Hove (Photo: Hannah Awcock).

I think there is a difference between artefacts that are displayed in a home or garden, and those that are left in the street, like this one. The person who made this will probably never get any praise or recognition, whereas I’d they put it up in their front garden then at least the neighbours might acknowledge it! I do think there is a competitive element to the artefacts displayed in or around people’s homes, reflecting the desire to ‘keep up with the Jones’ (Photo: Hannah Awcock).

This origami heart is also encouraging people to be kind to each other. These artefacts have a lot in common with street art, in that people put time and effort into them, but are still willing to give up control over what happens to them. This heart could last a day, a month, or maybe longer, but the person who made it has no say in that (Photo: Hannah Awcock).

People may be producing these artefacts out of a desire to be a part of something. The Lockdown has been a lonely experience for many people in different ways, and any sense that you are part of a community can be helpful (Photo: Hannah Awcock).

I have found one or two protest stickers related to coronavirus, but a lot of the stickers appearing over the last few weeks do not have an explicitly political message. This sticker, by local artist MyPenLeaks, has popped up all over Hove and Portslade (Photo: Hannah Awcock).

The children of keyworkers and those who are vulnerable have been continuing to go to school throughout the lockdown. Many primary schools have done craft projects like this one (Photo: Hannah Awcock).

Chalk drawings and messages have become common during the lockdown. Lots of children have turned the pavement outside their house into an obstacle course for themselves and passersby. (Photo: Hannah Awcock). 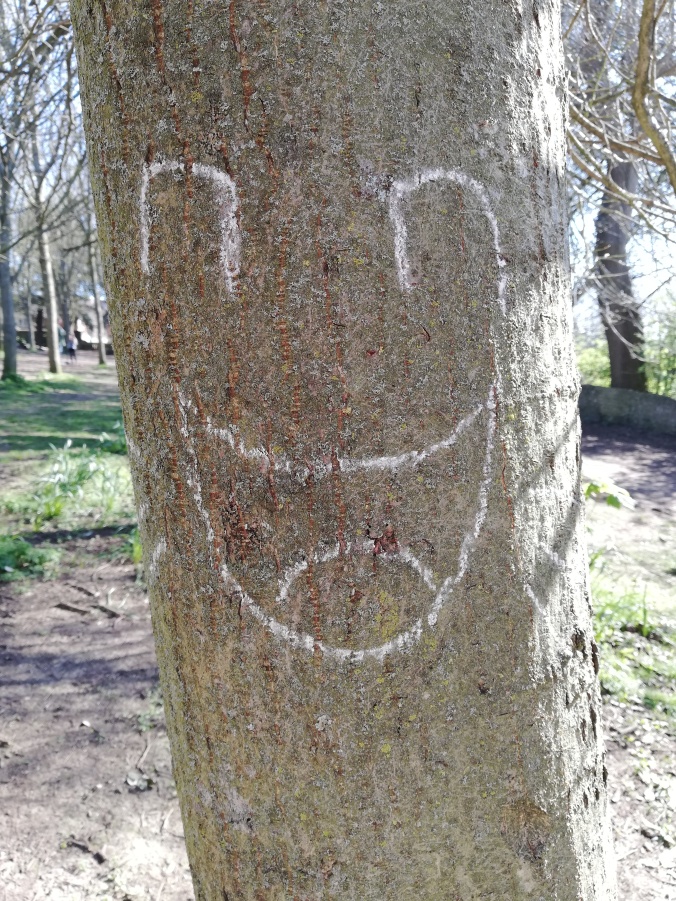 The overwhelming message of these street artefacts is a positive one. They provide a sense of hope and resilience at a time when these qualities are being sorely tested (Photo: Hannah Awcock).

2 thoughts on “Street Artefacts in the 2020 Lockdown”