An Extinction Rebellion poster at the main entrance to the University of Hull (Photo: Hannah Awcock, 16/03/20).

I have been living in Hull for just over a year now. Over that time I have come to appreciate and love this city. The nature of the academic job market means that I will have to move on soon, but I will miss it. One of my favourite things about Hull is that there is always something interesting to see when you’re out and about, whether it’s an interesting historic building, a piece of street art, or a new protest sticker. I have written about protest stickers in Hull before, on this blog and elsewhere, but new and intriguing stickers continue to appear.

This sticker, and others like it, began appearing in several cities a few months before the UK left the EU. The stickers promote the positive elements of the EU. They are produced by North East for Europe, a grassroots campaign group (Photo: Hannah Awcock, 09/09/19).

A lot of stickers in Hull relate to international politics. Stickers such as this one became much more common after the start of the European refugee crisis in 2015. This sticker was produced by Active Distribution, a radical publishers and shop which produces and sells more than 200 sticker designs (Photo: Hannah Awcock, 03/10/20). 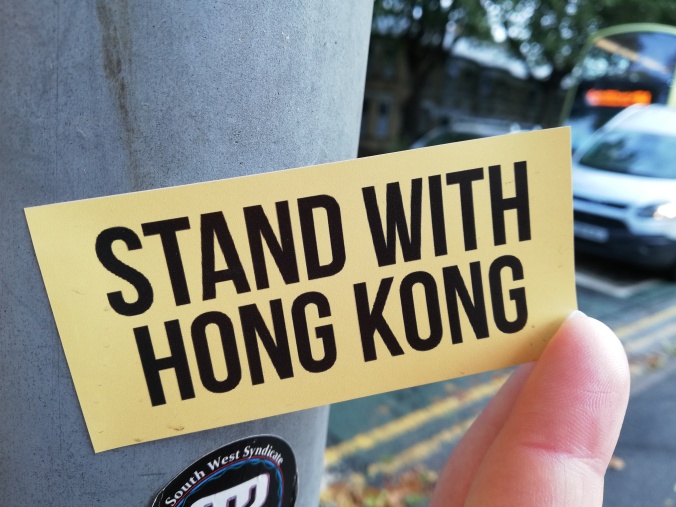 This sticker refers to the protests in Hong Kong that took place throughout 2019 over the perceived increase in the control of Hong Kong by mainland China. The protesters called for support from the rest of the world, and whilst governments did little, there was clearly some international solidarity (Photo: Hannah Awcock, 15/10/19).

Whilst a lot of protest stickers are about international politics, some relate to local issues and groups. Football Lads and Lasses against Fascism (FLAF) was created to counter the increase of far-right politics among football fans. It is not tied to any particular team, but this sticker is connecting the group to the Hull Tigers, who play in the second tier of English football (Photo: Hannah Awcock, 19/09/19).

The Democratic Football Lads Alliance is an example of the kind of group that FLAF aims to counter. Set up in 2017 after a series of terror attacks in the UK, it is strongly associated with far-right politics and has been described as anti-Muslim by the Premier League (Photo: Hannah Awcock, 03/02/19).

Putting stickers up in public space is something that football fans and activists have in common. This sticker combines the two, combining support for Bristol City with an anti-police message (ACAB stands for All Cops Are Bastards). This image is a play on a popular Banksy work which shows a teddy bear throwing a petrol bomb at riot police. Banksy is strongly associated with Bristol (Photo: Hannah Awcock, 30/06/19). 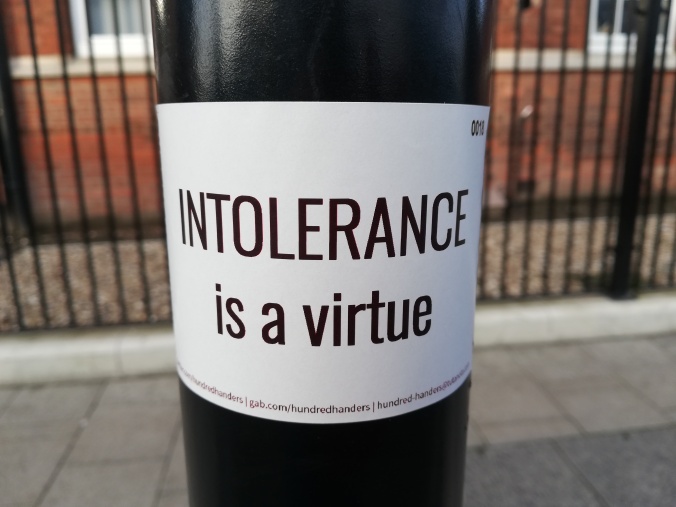 This sticker was produced by the Hundred Handers, a far-right white supremacist group that prizes anonymity. The group’s members are expected to print and disseminate stickers around their local area. This sticker and several others appeared overnight on Newland Avenue, but most were quickly taken down or covered up (Photo: Hannah Awcock, 31/10/19). 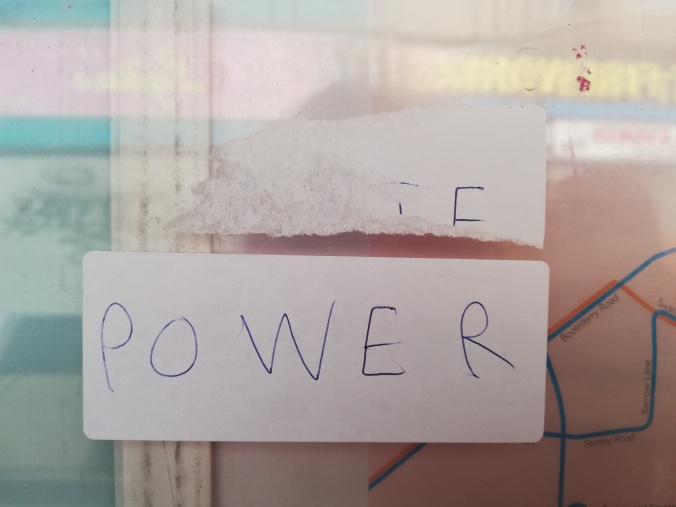 Protest stickers range from the elaborately designed and printed to the hand made. This example is firmly in the latter category. I can’t be sure what the top half of the message said, but I’m fairly certain it was “white”. Stickers with a particularly offensive or controversial message often don’t last long before they are covered up or (partially) removed (Photo: Hannah Awcock, 02/09/19). 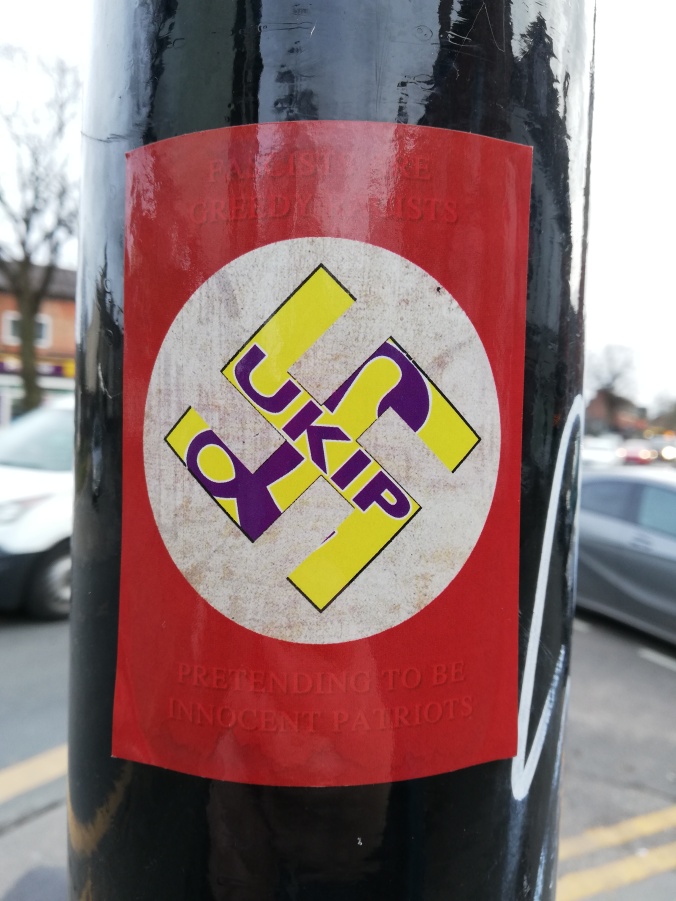 Whilst there are some right wing and xenophobic protest stickers in Hull, there are more from an anti-fascist/anti-racist perspective. This sticker is comparing UKIP to the Nazi Party. The text on the red background is hard to make out, but it says: “Fascists are greedy racists pretending to be innocent patriots” (Photo: Hannah Awcock, 05/03/20). 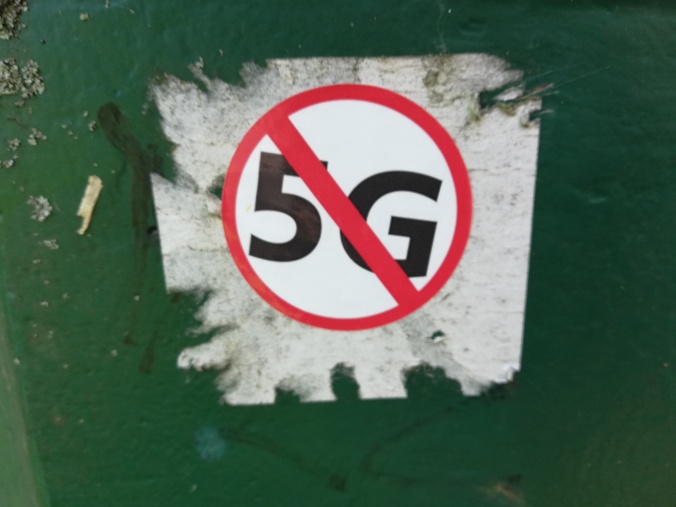 The roll out of 5G mobile network is proving controversial in several respects, including claims that it damages health, and fears over the potential implications of allowing Chinese firm Huawei a role in building the infrastructure. Anti-5G stickers are becoming increasingly common (Photo: Hannah Awcock, 30/06/19).

A few weeks ago, I was wondering how long it would take for the coronavirus to come up in a protest sticker. Not long apparently. This sticker is homemade, but is very well made compared to the White Power sticker above. It was removed the same day I took this photo, so I was lucky to catch it (Photo: Hannah Awcock, 16/03/20).