Turbulent Londoners is a series of posts about radical individuals in London’s history who played a part in the city’s contentious past. Most of the Turbulent Londoners I feature are women, because their contribution to history has so often been overlooked. My definition of ‘Londoner’ is quite loose, anyone who has played a role in protest in the city can be included. Any suggestions for future Turbulent Londoners posts are very welcome. Next up is Susan Lawrence, an upper class politician who started her career as a Conservative Councillor, but converted to socialism. 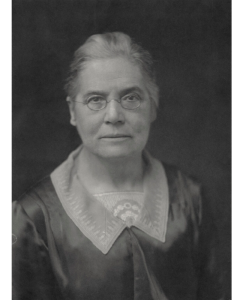 Susan Lawrence was born into a life of wealth and privilege. Well educated, she embarked upon a career as a Conservative politician. It didn’t take her long before the realities of life in London helped in her conversion to non-revolutionary socialism. She became a devoted member of the Labour Party, and went on to be an effective politician.

Arabella Susan Lawrence was born in London to a prosperous family on 12th of August 1871. She was well education, studying at University College London and Newnham College, Cambridge. In her early life, Susan was politically and socially conservative, strongly believing in the British Empire, the Church of England, and charity. In March 1910 she was elected to the London County Council (LCC) as a Conservative. As she immersed herself in London politics however, her beliefs began to diverge from the policies of the Conservative Party.

Over the next two years, Susan underwent a political and personal transformation. Previously a devout member of the Church of England, she became much more secular in her beliefs. She also realised that social change could not be brought about by voluntary work alone, it required action by the state. Susan joined the Fabian Society, a group of non-revolutionary socialists (they wanted to bring about a socialist society by gradual means), and became good friends with Sidney and Beatrice Webb, a power couple of British socialism. Susan served  on the executive of the Fabian Society from 1913 until 1945. As a member of the LCC, Susan became aware of how little the women who cleaned London’s schools were paid. As a result, she became involved in women’s trade unionism. She met and befriended Mary Macarthur, the secretary of the Women’s Trade Union League (WTUL). For the next decade, Susan worked to organise working class women, earning the nickname ‘Our Susan’. In 1912, she resigned from the LCC because of this dramatic change in her beliefs.

Susan still believed in making a difference, and the following year she was re-elected to the LCC as a Labour Councillor for Poplar in East London. After her mother’s death, Susan moved to the East End, living just off the East India Dock Road. It was not unusual at this time for middle- and upper-class women to try to help East London’s poor, but Susan displayed an uncommon level of dedication by actually moving there.

During the First World War, Susan was a Fabian representative on the War Emergency Worker’s National Committee, a coalition of Labour and socialist groups who worked to improve conditions for the working classes. She also served on government committees, trying to ensure the interests of workers,  and particularly female workers, were taken into account. Like many other Labour politicians, Susan was optimistic that post-war reconstruction could be used to benefit the working classes. In 1918, she was elected to the new women’s section of the Labour Party’s National Executive. In just 6 years, Susan had become one of  Labour’s most important women.

In 1919, Susan was elected to Poplar borough council. Two years later, she was one of 30 Poplar Councillors imprisoned because of the Poplar Rates Strike. The Councillors took a stand over the unfair way in which unemployment benefits were paid for in London, which meant that the poorest boroughs had the highest burdens. The government sentenced them to prison indefinitely, but the government backed down and Susan and the other Councillors were released after 6 weeks. Despite their success, the Poplar Councillor’s illegal strategy was unpopular with the rest of the Labour Party.

Women were allowed to stand as MPs for the first time in 1918. By 1924, there were 8 female MPs in Parliament. Susan Lawrence is the second from the left (Source: National Portrait Gallery).

Susan was loyal to the Labour Party however, and in the 1920s she turned her attention to Parliamentary politics. After failing to win seats in the 1920 and 1922 elections, Susan was elected as the MP for East Ham North in 1924, becoming one of Labour’s first 3 female MPs. Although she was never a Minister, Susan held several positions in Labour governments became quite successful. She was the first woman to chair the Labour Party Conference in October 1930. Despite being a trailblazer for women in politics, women’s rights was never a priority for Susan. She had been indifferent at best to women’s suffrage, and she didn’t want women’s issues to divide the Labour Party; for Susan, no other identity was more important than class. Unlike other female politicians at the time, such as Ellen Wilkinson, she seemed impervious to the pressure to appear ‘feminine’; she never took much interest in her clothes or appearance.

In the 1931 general election Susan lost her seat, and this marked the end of her Parliamentary career. She tried to get re-elected in 1935, but was unsuccessful. A new and younger group was increasingly leading the Labour Party, and Susan was increasingly alienated. She remained on the Party’s executive until 1941, however. Susan dedicated her retirement to translating books into braille. She moved to Berkshire after her house was bombed during the Blitz, but returned to London after the war, moving to South Kensington. She died at home on 24th of October 1947.

Susan Lawrence was a dedicated and effective politician. She was not a suffragette, but she shared with them a willingness to go to prison for what she believed in. I think it must have taken a huge amount of bravery and resolve to shift her political allegiance as she did, and I admire her for that. Contemporary politicians seem incapable of admitting that they were wrong, and I think they could learn something from Susan.