Brexit has become a popular topic for people who make and distribute protest stickers (Photo: Hannah Awcock, North Bank of the Thames, 12/09/17).

In September 2016, I wrote a London’s Protest Stickers blog post about the EU Referendum. Little did I know that not only would we still be talking it about Brexit two and a half years later, but that we would be no closer to a resolution. The Brexit debate has rumbled on, getting more bitter and divisive as time goes on. As with any significant political issue, Brexit had become a popular topic for London’s protest stickers.

You can see where I found all of these stickers on the Turbulent London Map. 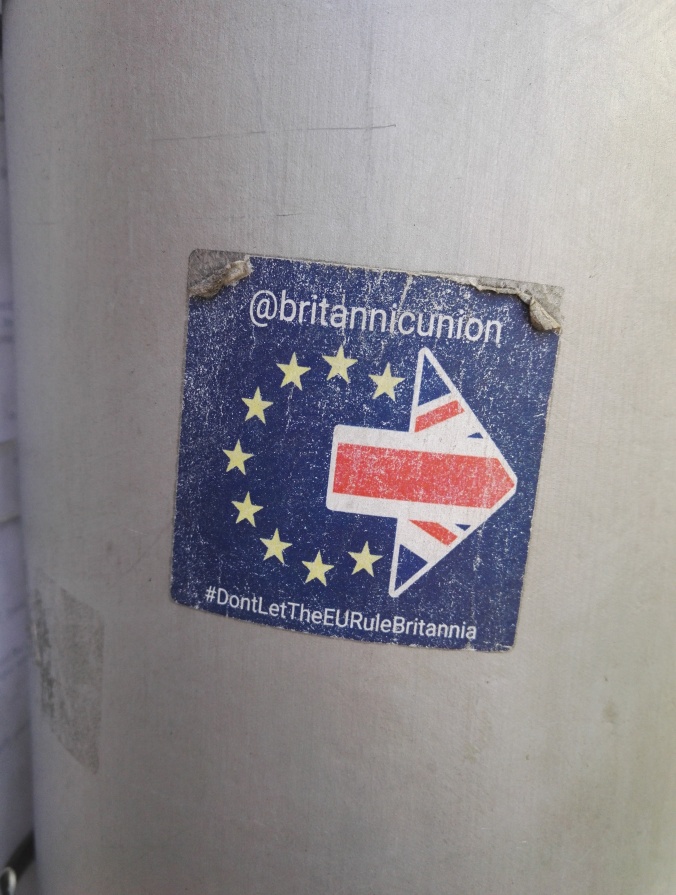 Most of the protest stickers I come across are anti-Brexit, but I do find the occasional pro-Brexit sticker, like this one. Britannic Union is a right-wing, pro-Brexit Twitter account (Photo: Hannah Awcock, King’s Road, 08/04/17). 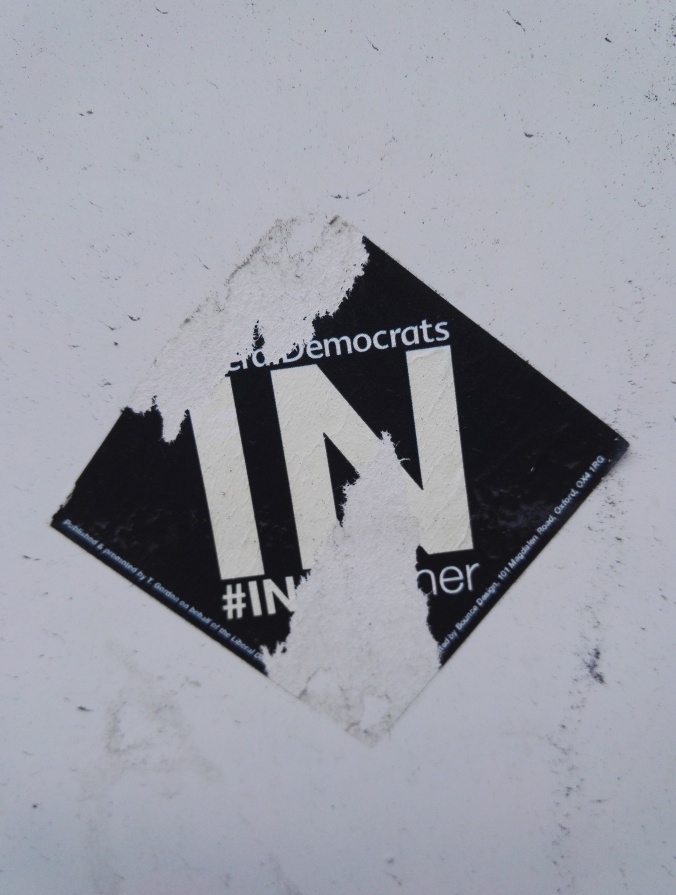 This sticker is faded and torn, but it is still recognisable. It was produced by the Liberal Democrats, who campaigned to Remain in the run-up to the referendum (Photo: Hannah Awcock, Broad Sanctuary, 18/10/16). 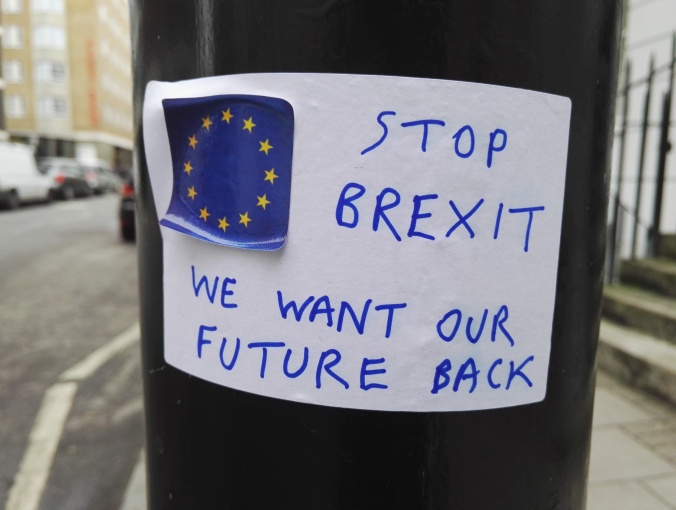 It is quite unusual to find a handmade sticker like this one. It isn’t going to win any art prizes, but I think that it is quite effective in getting the message across (Photo: Hannah Awcock, Guildford Street, 10/01/17).

This sticker is also handmade, and is a little more artistic. It doesn’t directly refer to Brexit, but the message I take from it is that Britain can’t survive alone, and in the current political climate it’s hard not to link it to the EU. Sometimes, people respond to stickers by writing on or around them. In this case, someone has taken the message of the sticker a little too literally. I love the way that protest stickers sometimes spark debates on city streets (Photo: Hannah Awcock, 09/10/16).

This sticker is about the cost of student housing, not Brexit. But it was placed on the inside of a toilet cubicle, and became the site of a quite heated Brexit debate. In this case, the tradition of writing on the walls of toilet cubicles has become political (Photo: Hannah Awcock, Senate House Library, 10/01/17) 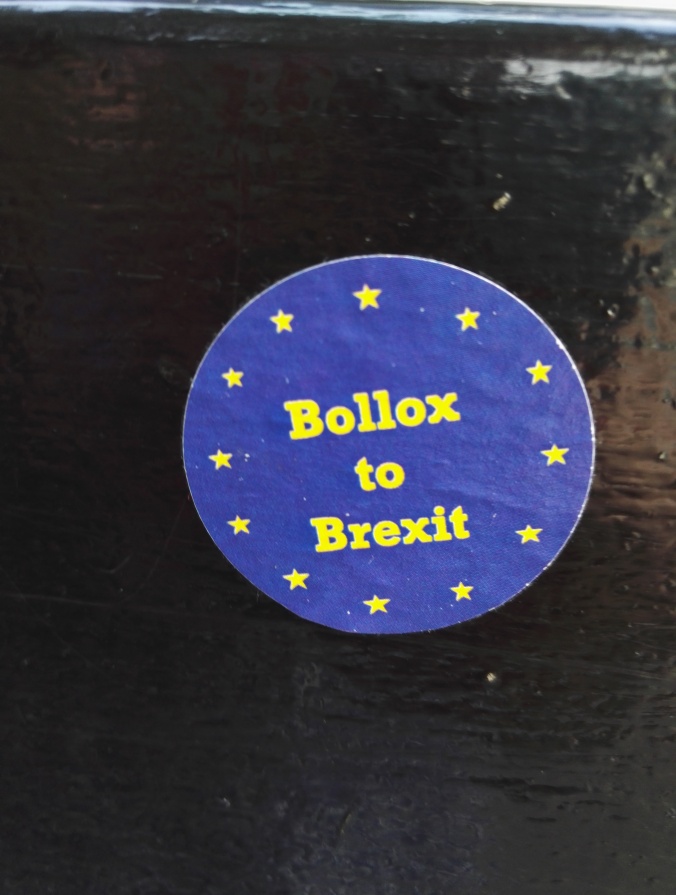 This Bollocks to Brexit sticker has become a common sight all over the country over the last few years (Photo: Hannah Awcock, 12/10/17, Swiss Cottage). 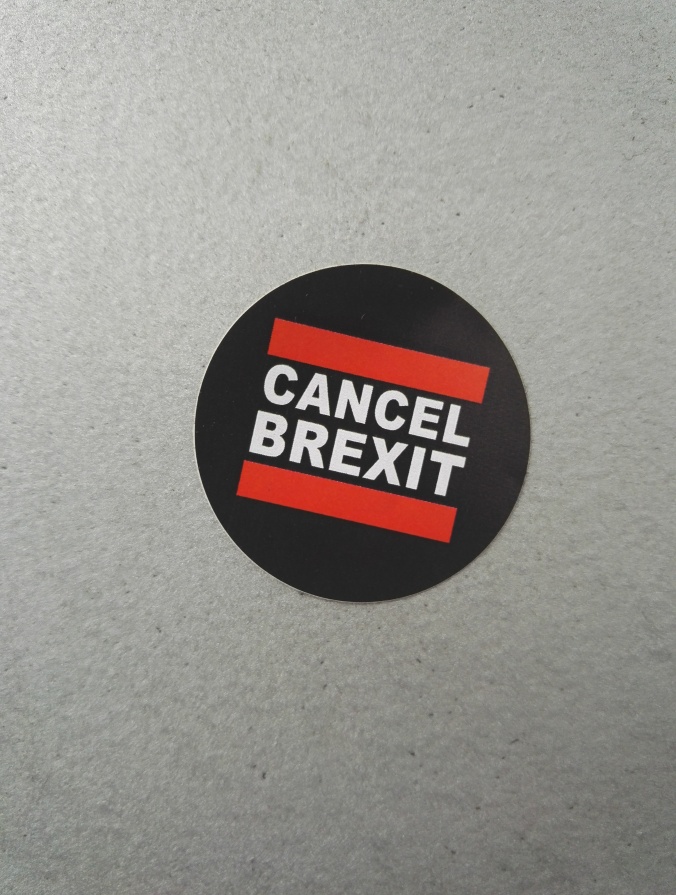 This is another simple design, which resembles the Run DMC logo (Photo: Hannah Awcock, 27/12/18, Southbank).

The question of whether or not to have a second referendum is a very contentious one. Lots of people are campaigning for a ‘People’s Vote’ (Photo: Hannah Awcock, 04/06/18, Victoria Station).