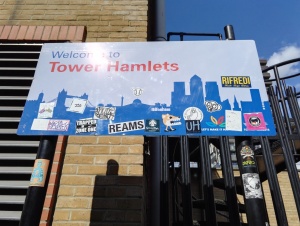 Stickers of all kinds are a common sight in London (Photo: Hannah Awcock, Shadwell Gardens, 12/09/17).

Many of the issues that I talking about in these protest stickers blog posts can be traced back to our underlying economic system: capitalism. As such, many of the protest stickers I find take issue with capitalism directly. Linked to capitalism is austerity, an economic policy of public spending cuts associated with neo-liberalism, the system which governments in the UK and USA have followed for almost the last half-century. Since the last global financial crisis in 2008, the UK government has enforced a policy of austerity that has affected public services in all areas. A significant amount of the energy of activists and social movements since 2010 has been devoted to fighting these cuts, and countering their impacts. The protest stickers I’ve found reflect this struggle against austerity and the wider economic system that it derives from.

This sticker was produced by the Communist Party of Great Britain (Marxist-Leninist). Their name may not be very punchy, but the sticker is (Photo: Hannah Awcock, Bloomsbury Road, 28/05/17). 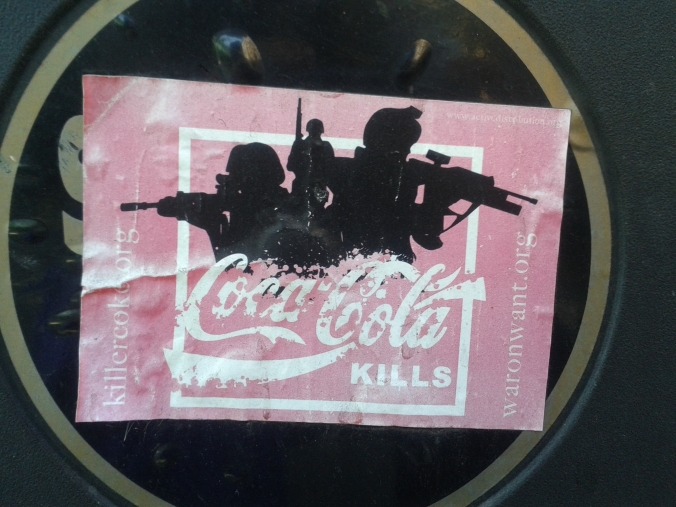 This sticker was produced by Active Distribution, but points viewers towards the websites of two other groups. The Campaign to Stop Killer Coke works to combat the violence that union leaders often face when standing up to Coca-Cola and it’s bottlers and subsidiaries, particularly in Columbia and Guatemala. War on Want campaigns on a variety of issues with the overarching aim of creating a more just world. In 2006, they published a damning report on Coca-Cola’s activities around the world (Photo: Hannah Awcock, Kennington Park Road, 04/06/15).

This sticker is produced by a group called Anti-Capitalist Action. The website on the sticker doesn’t exist, but there is an active community page on Facebook (Photo: Hannah Awcock, Euston Road, 09/02/16). 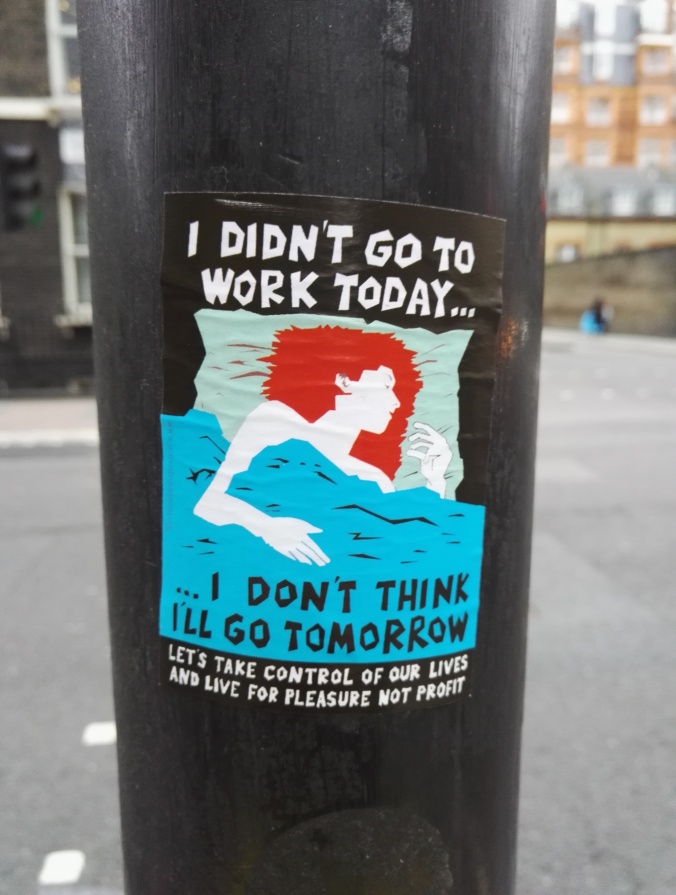 This sticker isn’t associated with a particular group or campaign, but has a general anti-capitalist sentiment, urging the viewer to live for their own pleasure rather the profits of their boss (Photo: Hannah Awcock, Torrington Place, 21/02/17).

This sticker was also produced by Active Distribution. It features an unattributed quote relating to the way that it is often the most vulnerable people, such as the poor, the homeless, or immigrants, who are blamed for some of society’s biggest structural problems (Photo: Hannah Awcock, Euston, 17/02/15).

The People’s Assembly is an anti-austerity movement that argues that austerity is not the only way to improve the British economy. In fact, they argue that it does not lead to a strong economy at all (Photo: Hannah Awcock, Malet Street, 17/02/15).

Stick it to the Tories is a sticker campaign thought up by the West Wales Peoples Assembly. The project is a few years old now, and unfortunately the website is no longer functioning. Nevertheless, it is an interesting example of a forum for sharing sticker design and encouraging protest stickers (Photo: Hannah Awcock, Charing Cross Road, 24/05/15)

This sticker also focuses on the Conservative government’s austerity policies rather than austerity more generally (in recent years, Labour and the Liberal Democrats have been just as supportive of cuts as the Tories). This sticker highlights the hypocrisy of austerity, which takes resources away from those who need it the most, supposedly because of a lack of money. At the same time, the richest in society get tax cuts (Photo: Hannah Awcock, Swiss Cottage, 12/10/17).

This sticker uses symbols rather than words to get it’s point across. Scissors have been a well recognised symbol for economic cuts for the last decade or so. One of the key slogans during the student protests in 2010 was “Don’t run with scissors,” warning against hasty cuts that would do significant long-term damage (Photo: Hannah Awcock, Fleet Street, 20/06/15).