A suffragette struggling with a police officer during Black Friday. Photo by Rachel Barratt (Source: Museum of London).

By 1910, the women’s suffrage campaign had been gathering steam for several years. Frustrated with the lack of progress, the Women’s Social and Political Union (WSPU) were becoming increasingly militant, and their relationship with the government was deteriorating. Violence was escalating on both sides; the force-feeding of hunger strikers began in October 1909, for example. On the 18th of November 1910, around 300 members of the WSPU were treated so poorly by the police and bystanders outside Parliament in Westminster that the day became known as Black Friday.

During the 1910 general election campaign, Herbert Asquith, Prime Minister and leader of the Liberal Party, promised a Conciliation Bill to allow some women the right to vote in national elections. The Liberal Party won the election, and a committee of MPs proposed legislation that would have given 1 million women the right to vote. For many suffrage campaigners, the proposals didn’t go far enough, but it was still a massive step forward, and most campaigners supported the Conciliation Bill. Many MPs also supported the Bill, and it passed it’s first and second readings in Parliament. Asquith refused to give the Bill more parliamentary time, however, and called another general election before it could become law, killing it.

The WSPU saw Asquith’s actions as a gross betrayal; they had suspended militant action on the 13th of January 1910 because of the promise Asquith made to give some women the vote, and now their hopes had been dashed. They organised a rally at Caxton Hall in Westminster, followed by a protest march to Parliament. The rally started at 12pm, after which WSPU organiser Flora ‘the General’ Drummond organised the women into groups to march to parliament and petition Asquith directly. The first group was led by Emmeline Pankhurst and included several prominent suffragettes including Dr. Elizabeth Garrett Anderson and Dr. Louisa Anderson (sister and niece respectively of Millicent Garrett Fawcett, Hertha Ayrton and Sophia Duleep-Singh. When this group arrived at parliament at about 1:20 pm, they were admitted, told that Asquith wouldn’t see them, and then shown out into Parliament Square where they were met with utter chaos. 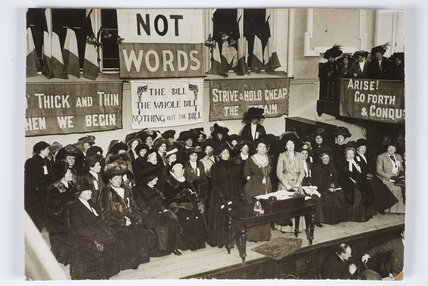 WSPU leaders at the meeting at Caxton Hall in Westminster on Black Friday (Source: Museum of London).

When the rest of the 300 marchers reached Parliament Square, they were met by aggressive police officers and male bystanders. The local A Division of the Metropolitan Police had plenty of experience policing suffragette protests, and knew how to handle them without resorting to excessive violence. Most of the policemen in Parliament Square on the 18th of November, however, were from Whitechapel and East London, and had less experience of policing WSPU protests. The women clashed with the police for 6 hours, during which time many of the women were sexually assaulted. Rosa May Billingshurst was a WSPU member who used a wheelchair. She was taken down a side street by policemen who stole the valves from her wheelchair so she couldn’t move, and abandoned her. Caxton Hall became a triage point, where injured protesters could retreat from the chaos. It appeared that the police deliberately tried to sexually humiliate the women to teach them a lesson rather than just arresting them. 4 men and 115 women were eventually arrested, although all of the charges were dropped by the Home Secretary, Winston Churchill, the following day.

The committee which had proposed the Conciliation Bill were appalled by the accounts of violence, and decided to investigate. They interviewed 135 protesters, 29 of whom described examples of sexual assault. Media sympathy was largely with the police, although plenty of people did speak out against the treatment of the protesters. There were calls for an inquiry, but Winston Churchill refused. The protest led to a change of tactics on both sides. The WSPU increasingly turned to covert protest tactics, such as window breaking and stone throwing, which gave them a chance to escape before the police arrived. The Metropolitan Police were also more careful about how they policed protests and when they made arrests.

The term Black Friday is now associated with over-the-top sales and rampant consumerism, but 100 years ago it had very different connotations. It was associated with the violent suppression of peaceful protest that became a defining moment in the campaign for women’s suffrage.

Hawksley, Lucinda. March, Women, March: Voices of the Women’s Movement from the First Feminist to the Suffragettes. London: Andre Deutsch, 2015.