It is now fairly well known that some women in Britain won the right to vote 100 years ago, in 1918 (women weren’t given the right to vote on equal terms as men until 1928). I recently heard that women in France did not get the right to vote until 1944. That got me thinking about when other countries gave women the right to vote. New Zealand was first, in 1893. The last, perhaps unsurprisingly, was Saudi Arabia, in 2015. There is still one country, however where women are not allowed at vote, Vatican City. Granted, the only elections that occur there are for the pope, but only cardinals can elect a new pope, and women are not allowed to be cardinals. Perhaps more of a problem is the fact that it is still very difficult for women to vote in many countries, despite them being entitled to. There is still work to be done, but we’ve also come a long way. Below are some examples that illustrate both how far we’ve come and how far we have to go.

A cartoon celebrating women obtaining the right to vote in New Zealand, published in the New Zealand Graphic in 1894 (Source: Alexander Turnbull Library).

New Zealand was the first country in the world which gave women the right to vote in national elections. This included Maori women, which would also prove to be groundbreaking; most colonial countries did not give aboriginal women the right to vote until some time after white women. The women’s suffrage movement in New Zealand developed at the same time as other movements in northern Europe and the US, in the late nineteenth-century. However, it also had a fairly strong moral element–the campaign was led by a New Zealand branch of the American Women’s Christian Temperance Union (WCTU). As such, women’s suffrage in New Zealand was opposed by the liquor industry as well as the other usual suspects. Nevertheless a petition in 1893 signed by 32,000 people (almost a quarter of the European female adult population) helped make the demand impossible to refuse, and women’s right to vote became law on the 19th of September 1893. 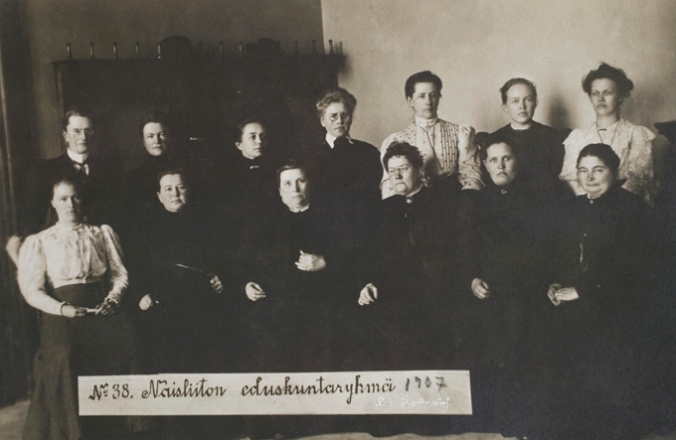 Some of the first female MPs in the world, elected in Finland in 1907. Conservative parliamentarians wore black tops, whilst social democrats wore white (Source: Wikipedia).

Finland was the first European country which granted women the right to vote. In 1906, it was part of Russia, although it was governed by the Diet, which dated from the time of Swedish rule. Only a small number of Finns could vote in the elections for the Diet, so it was not just women who felt disenfranchised. In 1905, unrest in Russia spread to Finland, and culminated with a general strike in October and November. Eager to restore peace, the Russian authorities conceded significant reforms, including parliamentary reform and universal and equal suffrage. Women were granted to right to vote, and at the same time the ability to stand in elections. It was the first country in the world that recognised women’s eligibility to stand for office. In March 1907, 19 women were elected to the new Parliament.

The campaign to grant white women the vote in South Africa was also started by the Women’s Christian Temperance Union, who felt that their demands would be ignored if they did not have the right to vote. The first Women’s Enfranchisement League was established in Durban in 1902, and this organisation became the Women’s Enfranchisement Association of the Union as more branches were established across the country. In the run up to the 1929 General Election, Prime Minister James Herzog promised to raise the issue in Parliament if women supported his re-election campaign. They did, and white women were given the right to vote on the 19th of May 1930. Solidarity for black women, however, was almost non-existent. Black South Africans, both female and male, were not able to vote until Apartheid ended in 1994. This was something I found particularly shocking, as it is within my lifetime. Sometimes it is easy to take advances in social justice for granted, particularly if you don’t have personal experience of what it was like before.

Swiss suffragettes complaining about the slow pace of women’s suffrage in during a parade in Bern in 1928. Little did they know it would take another 43 years (Source: Gosteli Archive).

In Switzerland, a change to the constitution requires a national referendum- it is one of the oldest and most direct democracies in the world. Yet it was the last European country to grant women the right to vote. It was not the government that had to be persuaded, it was the men, and that turned out to be a much harder job. Women’s suffrage was rejected by 67% of Swiss men in a referendum in 1959. It wasn’t until another referendum was held twelve years later that women in Switzerland won the right to vote in federal elections. One possible explanation for it taking so long is Switzerland’s neutrality during World War Two. Women did not get the same chance to prove their ability to maintain and run the country as in France, German and Britain. Whatever the explanation, it undoubtedly held women’s rights back; men had control over their wives’ bank accounts until 1985, and maternity leave wasn’t introduced until 2005.