Royal Holloway, University of London, has pretty good credentials when it comes to historical feminism. Officially called Royal Holloway and Bedford New College, it was formed from a merger of Royal Holloway and Bedford College in 1985. Both of the original institutions started out as women’s colleges. Bedford College was the first higher education college for women in the United Kingdom, founded by Elisabeth Jesser Reid in 1849. Royal Holloway was founded in 1879 by the entrepreneur and philanthropist Thomas Holloway. As such, both colleges have a number of notable female alumni, including…

The Emily Wilding Davison Building is a striking new Library and Student Services hub located in the centre of Royal Holloway’s campus. It is named after the well-known suffragette who was killed at the Epsom Derby in 1913 after running in front of the King’s horse, who attended Royal Holloway in the early 1890s (Photo: Hannah Awcock).

In 2017, Royal Holloway opened a new library building named after the well-known suffragette, Emily Wilding Davison. She studied English at Royal Holloway in 1891 although she could not complete her studies because she could not afford the fees after the death of her father in 1893. The Emily Wilding Davison Building includes a small exhibition space, which is currently hosting Suffrage: Education, Activism and Votes for Women until the 17th of March 2018. As someone studying historical protest at Royal Holloway, I felt almost obliged to go and check it out.

The exhibition includes items from Royal Holloway’s own Special Collections, as well as the British Film Institute, the Museum of London, and the Women’s Library at the London School of Economics. It covers the period from the foundation of Bedford College in 1849 to 1918, when the Representation of the People Act entitled some women to vote. The items are mostly textual, but there are also images, video footage, posters, and suffrage-based souvenirs. 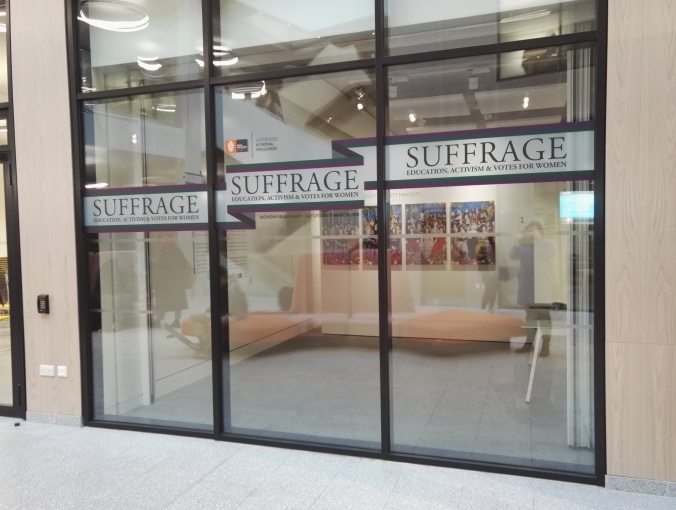 The exhibition space is small, but Suffrage makes good use of it. It is covers both suffragettes and suffragists, which is good to see– although suffragette organisations like the Women’s Social and Political Union and the Women’s Freedom League were good at attracting publicity and are still quite well-known, most of the women who campaigned for the right to vote were suffragists, believing in legal methods of persuasion. Unsurprisingly given the exhibition’s location, Suffrage also makes a strong connection between the suffrage campaign and women’s education. The fight for the right to vote is one of the most studied and represented campaigns in British history, particularly in this centenary year, so it is refreshing to see the topic approached from a different angle. I also like the long time period covered by the exhibition; events after 1905 tend to receive the most attention, but campaigners had been working hard for half a century before that.

At the back of the exhibition, almost hidden behind a partition, footage of suffrage demonstrations is projected onto a wall. The campaign was one of the first to be filmed quite extensively, and I have always found the black and white grainy footage captivating. I suspect that I am not the only one who enjoys watching such footage, I think it helps to make historical protest more accessible. I was pleased to see the films included in Suffrage, therefore, although I think they could have been given more prominence.

Due to its origins, Royal Holloway and Bedford New College has a strong connection to women’s history. Suffrage: Education, Activism and Votes for Women highlights some of that history in a balanced and accessible way, as well as showcasing the College’s impressive archival collections.