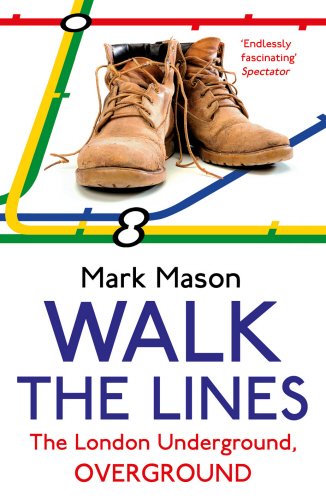 Walk the Lines: The London Underground, Overground by Mark Mason.

The London Underground is one of the most distinctive elements of the city, but it does result in a disjointed perception of the metropolis–I don’t feel like I really got to know how the various areas of London fit together until I moved there and started to walk or get the bus more. Walk the Lines: The London Underground, Overground is the ultimate exercise in getting to know London; author Mark Mason walked the route of every underground line from beginning to end, then wrote a book about it.

I think the concept for this book is excellent; but unfortunately I am not so keen on its execution. I think it would be really interesting to repeat this challenge in a decade or so, London changes so quickly that some of Mason’s observations already feel out of date. Part of me also wants to recreate the exercise in my home town of Brighton, based on a map of a fictional underground network created by illustrator John Sims (see below). Walk the Lines is a fascinating idea that got me thinking about my own relationship with London, and as well as other British cities

Sadly, I did not get on so well with Mark Mason’s writing. I did not like the tone of the book at all when I started reading it; it felt like Mason was trying too hard to be funny. This did become less noticeable as I progressed through the book, but I couldn’t say whether it’s because the tone improves or because I just got used to it. I also dislike Mason’s heavy use of footnotes. They interrupt the flow of the writing, and sometimes I missed the superscript, and found myself searching the page for the relevant point. I think they are unnecessary in Walk the Lines.

I also found Mason himself to be a bit arrogant–one of his reasons for undertaking the challenge was to own London, a desire which I think is conceited and a bit odd, quite frankly (p. 4-5). Nobody owns London. If anything, the opposite is true; there have been several occasions when I have felt that London’s influence over my life has been a bit too significant for comfort. In addition, Mason is snobbish about anything that is ‘not London.’ He seems to look down on other cities and London’s suburbs, and view them as automatically inferior. I understand that both of these attitudes come from a great love of London, I too am captivated by it. I am just not so keen on how this affection manifests itself in Mason’s writing.

The final significant issue with Walk the Lines is the lack of photographs. This is a book about the many different faces of London, but there is not a single image of Mason or the different aspects of London he encountered on his walks.

The concept of Walk the Lines is not the only element of the book that I liked however. I enjoyed Mason’s musings on the subjectivity and power of maps, although these are not new ideas to geographers. The book also contains some decent historical facts. For example, London cabbies call the junction on which the Royal Geographical Society sits ‘Hot and Cold Corner,’ because the building has statures of David Livingstone and Ernest Shackleton. Finally, I enjoyed the sections when Mason stops along his walks to talk to other people about their perceptions of London, such as: artist and ex-Popstar Bill Drummond; The Archers actor Tim Bentinck, who was the ‘Mind the Gap’ voice on the Piccadilly Line for 15 years; and John Pearson, the official biographer of the Kray twins.

I enjoy reading books about London, and I admire the inventive approach in Walk the Lines. I’ve always thought that the best way to get to know a city is to walk around it, and I like the idea of using a city’s transport network, effectively its circulatory system, to organise such exploration. However, I am not so keen on Mason’s writing style or attitude towards London. This is not a bad book, it just isn’t a great one either.