The Reformers’ Memorial stands in the non-conformist section of Kensal Green Cemetery in the London borough of Brent (Photo: Hannah Awcock).

The Reformers’ Memorial in Kensal Green Cemetery in Brent in north east London is a lesser-known memorial to 75 British reformers. Some of the better known include: Elizabeth Fry, prison reformer; Charles Bradlaugh, MP and atheist; John Ruskin, writer, artist, and social reformer; William Cobbett, parliamentary reformer; and John Stuart Mill, philosopher and political economist. Erected in 1858, the memorial was update in 1907, restored in 1997, and given Grade II listed status in 2001.

Kensal Green Cemetery was the first of the ‘Magnificent 7′, cemeteries established in the 1830s and 40s in what was then the suburbs of London to reduce overcrowding in inner city burial grounds. Highgate Cemetery, the final resting place of Karl Marx, was the third of the Magnificent 7 to be established, in 1839. Kensal Green Cemetery is well worth a visit in its own right, it has a peaceful, eerie beauty that contrasts sharply with the often manic atmosphere of modern London.

The Reformers’ Memorial is located in the non-conformist section of the cemetery, located close to the main entrance, near the crossroads of Harrow Road and Ladbroke Grove/Killburn Lane (I’m giving detailed directions because I had trouble finding the memorial–I entered the cemetery by a smaller gate, where they weren’t giving out maps). 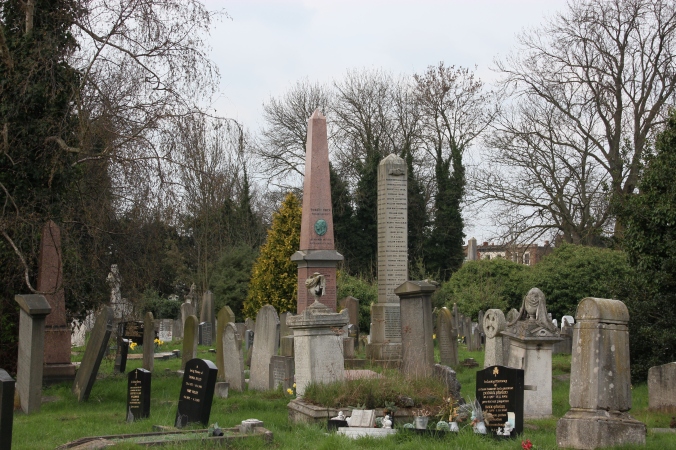 The memorial and it’s pair, an obelisk dedicated to the memory of Robert Owen, stand out amongst the graves of Kensal Green Cemetery’s non-conformist section (Photo: Hannah Awcock).

The two memorials in around 1900. The Reformer’s Memorial only had 50 names inscribed on it at this point; the rest were added in 1907 by Emma Corfield (Photo: People’s Collection Wales).

The memorial is a grey granite obelisk on a sandstone base, signed by J.S. Farley masons. It was erected in 1885 by Joseph William Corfield.  The names of 50 well-reformers, “who have generously given their time and means to improve the conditions and enlarge the happiness of all classes of society,” were inscribed in the stone. Two decades later, in 1907, Joseph’s daughter Emma added a further 25 names. It is a pair to the Robert Owen memorial, a pink and grey granite obelisk erected in 1879, by public subscription organised by Joseph Corfield. Owen was a Welsh social reformer, and one of the founders of the cooperative movement. Both memorials were refurbished in 1997, at the instigation of Stan Newens, an MP and MEP for both the Labour and Co-operative parties. Both memorials were given Grade II listed status in 2001 for their “special architectural or historic interest” (Historic England, n.d.). It is unusual to have non-funerary monuments in a public cemetery, so the two memorials stand out in this regard too.

The main inscription of the Reformer’s Memorial (Photo: Hannah Awcock).

Radicals and activists place a great deal of significance on the past; historical movements, groups, and individuals, are a powerful source of inspiration, encouragement, and identity. Both the Reformer’s Memorial and the Robert Owen Memorial are a reflection of this appreciation of the past. They give us an insight into how late-Victorian non-Conformists perceived their radical history. The reformers listed on the memorial indicate who the Corfield family looked up (or back) to, and what kinds of behaviour and causes they were inspired by. Memorials are as much a reflection of the time in which they were produced as they are of the past they are representing, which is one of the things that makes them so interesting.

Some of the names on the Reformer’s Memorial are beginning to be obscured by the effects of the weather and time (Photo: Hannah Awcock).

I don’t imagine that the Reformer’s Memorial receives that many visitors. It’s a little obscure; even a stonemason working in the cemetery didn’t know what it was when I asked for directions. It is also starting to look a bit weathered, and some of the names at the top of the obelisk are partially obscured. I for one think this is a shame, so if you ever find yourself with a bit of time to kill in London, why not pay it a visit, and commemorate those who “felt that a happier and more prosperous life is within the reach of all.”