Around the time I was putting together the first Protest Stickers: Egham blog post, person or persons unknown went on a protest stickering spree on and around the Royal Holloway campus. I can’t know for certain that they were all put up at the same time by the same person (or people), but I suspect that they were. The next time I was back on campus two weeks later, quite a few had been peeled or scratched off, so I think that I just happened to be at Royal Holloway just after they were all put up. All of the photos in this post were taken on one of these two days, the 16th and the 30th of November.  Most of the stickers were anti-fascist, which is a very common topic for protest stickers, and also another reason why I think that they were all put up at the same time.

This is the only sticker that explicitly mentions a campaign group. Anti-fascist groups often put up stickers when they travel to other places, and it appears that the London Anti-Fascists  are no exception (Photo: Hannah Awcock, Harvest Road, 16/11/16).

I like the powerful visual imagery of this sticker, which I found at the traffic lights at the top of Egham Hill, close to the Royal Holloway campus (Photo: Hannah Awcock, Egham Hill, 30/11/16). 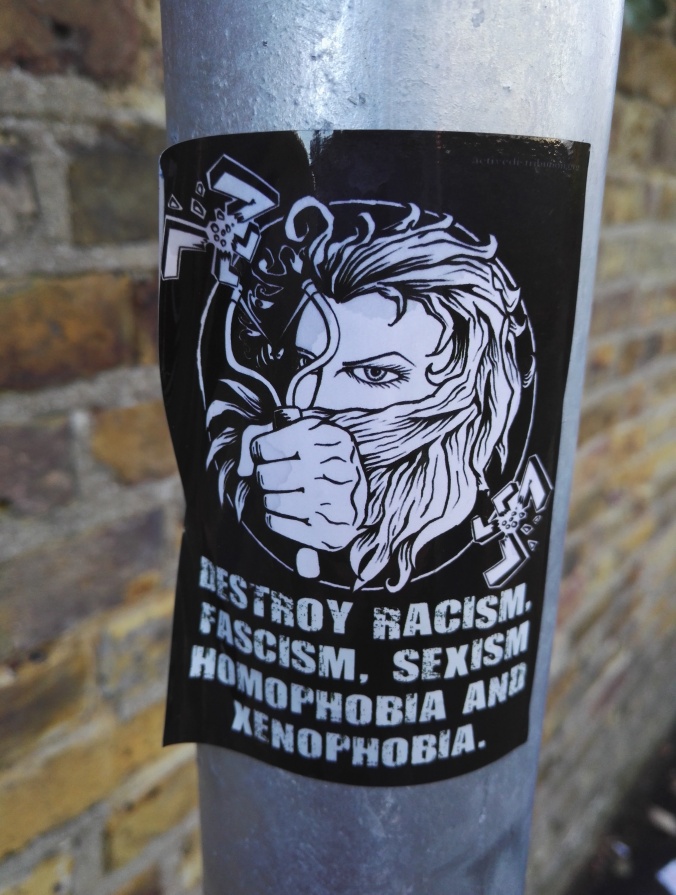 This sticker uses the same image as the last one, but the wording is slightly different (Photo: Hannah Awcock, Harvest Road, 16/11/16).

My Dad is not a big fan of board games, and whenever we force him to play Monopoly he always sabotages the game by adopting this approach, and refusing to buy anything. I’m pretty certain this sticker isn’t referring to my Dad’s Monopoly style though (Photo: Hannah Awcock, Royal Holloway Campus, 16/11/16).

This sticker was located at the main entrance to Royal Holloway, making its message all the more meaningful. Someone took exception to it however, as when I went back two weeks later it had been completely removed (Photo: Hannah Awcock, Royal Holloway Campus, 16/11/16 and 30/11/16).

This sticker was on the other side of Royal Holloway’s main entrance. It was also removed by the time I went back, but not quite as effectively. I wonder if it was the same person who scratched both of them off (Photo: Hannah Awcock, Royal Holloway Campus, 16/11/16 and 30/11/16). 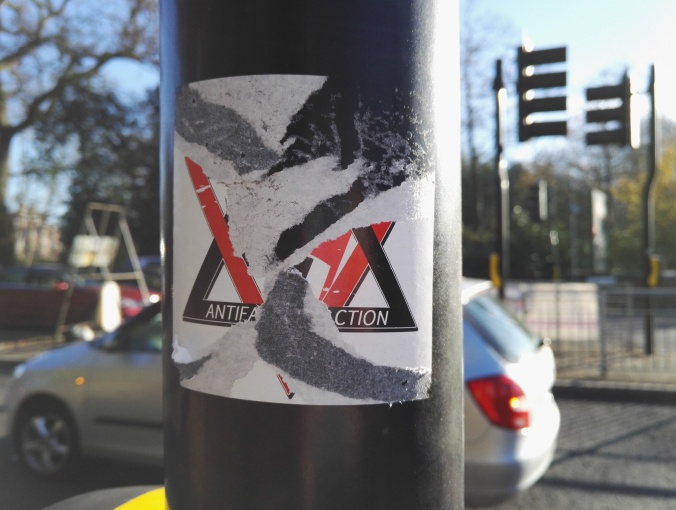 This sticker is also at the traffic lights at the top of Egham Hill. It has also been scratched away, but because of its location nest to a pedestrian crossing, I am inclined to suspect it was more to do with boredom whilst waiting for the lights to change than a strong opposition to the sticker’s message (Photo: Hannah Awcock, Egham Hill, 30/11/6).

This is the same sticker, on the road between the traffic lights and Englefield Green, a village even smaller than Egham. It has not been defaced, so the sticker’s message is clear (Photo: Hannah Awcock, St. Jude Road’s, 30/11/16).