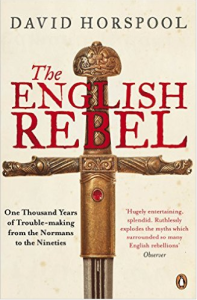 The English Rebel by David Horspool.

David Horspool. The English Rebel: One Thousand Years of Trouble-making from the Normans to the Nineties. London: Penguin, 2010. RRP £12.99 paperback.

I have read several books about the history of protest in London, but I recently realised that I haven’t read much about the national history of protest. The English Rebel: One Thousand Years of Trouble-making from the Normans to the Nineties is a good place to start for anyone interested in how dissent has shaped the history of England. It is well-written, well-paced, and I thoroughly enjoyed reading it.

David Horspool sets out to disprove the stereotype that the English are peaceful and submissive by demonstrating that “from Cornwall to Norfolk, from Sussex to Northumbria, England is crisscrossed with the ghosts of rebels marching, meeting, and fighting” (p xvi). The book is arranged chronologically, starting with opposition to the Norman invasion in 1066. Contrary to popular belief, the English did not just roll over and submit after the Battle of Hastings. Horspool then traces the history of rebellion in England featuring well known examples, such as the Peasant’s Revolt (1381) and the English Civil Wars (1642-51), as well as more obscure events, such as the Revolt of the Earls in 1075 and an uprising in Norfolk led by Robert Kett in 1549. I don’t pretend to know everything about the history of protest (far from it!), but I have been studying it for more than four years now, and there was quite a bit in there that was new to me.

The English rebel may only rarely be a triumphant or even a particularly likeable character. But he and she are as much a part of the fabric of English history as the monarchs, law-makers and political leaders they defied. They serve as inspiration, as warning, and sometimes simply as example.

In his Introduction, Horspool is very clear about the parameters of The English Rebel. He defines a rebel as a political opponent who risks their life or their liberty. Their opposition does not have to be aimed at government or the state, nor does it have to be violent or left-wing. The decision to focus only on England was also a deliberate one; Horspool argued that rebellions in a British or imperial context tend to have different objectives from English ones. It can be easy to criticise a project for leaving things out (I see it quite often in academia), and by explaining his decisions about what to include, Horspool fends off such criticism before its even made.

Rebels are drawn towards centres of power so the content of the book is inevitably skewed towards London and the south east, but Horspool does his best to balance it out. My biggest complaint about The English Rebel is a pet hate of mine–putting all the images together in the middle, then not mentioning them in the main text, so they feel rather detached and unnecessary. This is only a minor gripe however.

The English Rebel is an engaging read, which I would highly recommend for those with a general interest in history, as well as those with a more specific interest in protest and dissent. Horspool makes a convincing case that the English are much more rebellious than the stereotypes make out. I’ve always seen myself as British rather than English, but I feel just a bit more proud of my Anglo-Saxon heritage after reading The English Rebel.

One thought on “Book Review: The English Rebel- One Thousand Years of Trouble-making from the Normans to the Nineties”