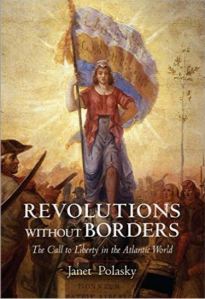 Revolutions without Borders by Janet Polansky.

Back in May, I went to a seminar given by historian Janet Polansky organised by the London Group of Historical Geographers. I enjoyed the seminar so much that I got the book so I could read Polansky’s arguments in more detail. And I wasn’t disappointed; I think Revolutions without Borders: The Call to Liberty in the Atlantic World is a very good read.

In the late eighteenth century Europe and the Americas went through a period of political turmoil which saw revolutions “From the Americas to Geneva, the Netherlands, Ireland, the Belgian provinces, France, Saint-Domingue, Guadaloupe, Poland, Martinique, Sierra Leone, Italy, Hungary, and Haiti” (Polansky, 2015; p.2 ). The American and French Revolutions are by far the best known, but almost no country surrounding the Atlantic Ocean remained untouched. Ideas, information, and people circulated back and forth across the Atlantic in an age before the Internet, telephones, even a postal service. Revolutions without Borders is about how these radical ideas and individuals traveled, both adapting to and shaping the contexts that they found themselves in.

Two centuries before the Arab Spring, without social media or even an international postal system, revolutionaries shared ideals of liberty and equality across entire continents. Theirs, too, was an international movement connected by ideas that traveled.

Polanksy structured the book by source material- each chapter is devoted to a different method of circulation such as official decrees, rumours, letters and travelers. Overall, I like this unusual approach because it brings archival research to the fore, which a lot of history books tend to gloss over. Different sources contain different kinds of information, and the structure of Revolutions without Borders highlights this. However, structuring the book in this way does necessitate some jumping back and forwards in terms of time, which did prove a little confusing on occasion. There is a Dramatis Personae and a Chronology, which may alleviate the effects of this confusion for some.

Sometimes when you read a book it resonates with current events. I experienced this whilst reading Revolutions without Borders. Chapter 9 focuses on itinerant revolutionaries, individuals who traveled the world during the revolutionary period, sometimes running from failed revolutions, sometimes running towards budding ones. Many of these people, including Benjamin Franklin, who lived in London for two decades*, had high hopes for the future of cosmopolitanism. They dreamt of universal citizenship, where a traveler would be welcomed as if returning home wherever they went in the world. Unfortunately this dream was not to be, and as the 1790s progressed travelers returning to America from Europe were shunned as dangerous radicals. The dream of universal citizenship struck a chord with me as I was reading this book, in the aftermath of the EU Referendum, and I couldn’t help but think that Benjamin Franklin would be disappointed with the result of the referendum. Universal citizenship seems that much further away now.

Revolutions without Borders is well-written and accessible. Relevant to both historians and geographers, I think it would also be enjoyable for those who read for leisure.

*The house where Franklin lived whilst in London is now a small museum, to which I would definitely recommend a visit.