A few weeks ago, two things happened that got me thinking about the relationship between photography and protest. My fellow Royal Holloway Geography PhD students Noeme Santana and Bergit Arends gave a wonderful seminar called ‘Industrial Photography Performed: The Struggle for Energy from Modernism to the Cold War’, about photography and industry in the twentieth century. The second thing was a great article published by The World Post in celebration of International Women’s Day, which featured 60 photos of women protesting around the world over the last 25 years. This combination got me thinking about how photography has been used to record and document protest, and the ways in which protesters have used photography to help get their message across. 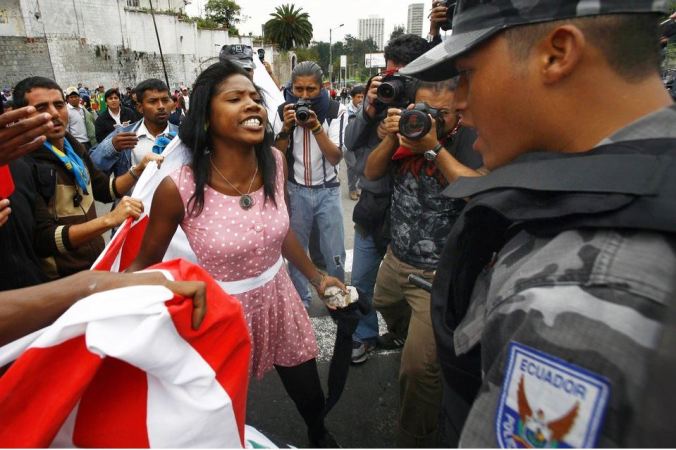 Multiple photographers are a common sight at modern day protests, like this one in Ecuador (Photo: PABLO COZZAGLIO/AFP/Getty Images).

There are often large numbers of photographers at protests now, both professional and amateur. As time goes on cameras get increasingly more affordable, so a sophisticated camera is now relatively cheap. As media and communication technologies have developed, so has protest and dissent. The printing press allowed texts to be disseminated far and wide, and the practice of reading aloud meant printed material was even accessible to the illiterate. More recently, the internet has allowed activists to communicate instantly across huge distances. Whether these technologies changed protest, or merely facilitated processes that were already going on is a debate for another day, but there is no doubt they had an impact. Photography is no different; it meant that protests and activists could be seen by people who were not immediately present. It is not in itself a new technology; I have written before about Christina Broom and her work photographing the suffrage movement in the early twentieth century. But it has changed drastically since it was first invented, and as it has evolved, so have the opportunities for capturing protest. 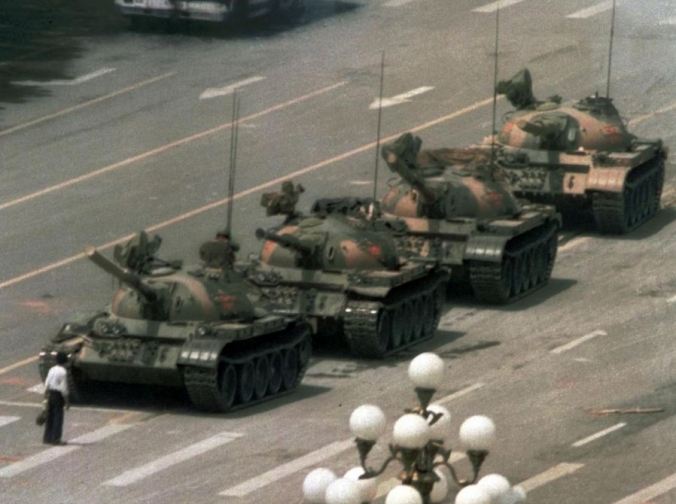 This image of a man standing in front of tanks in Tienanmen Square, Beijing, in 1989 is iconic. Visual imagery can be a powerful tool for protesters (Photo: AP).

Activists also use photography themselves to help communicate their ideas. Photographs are often perceived as accurate, objective, representations. Although this is not actually the case, a photo is still an effective method of persuasion. They are often used by protesters on leaflets, posters, and stickers in order to try and convince people of their point of view. A recent example of this is the London housing activist group Focus E15, who are frequently in conflict with Robin Wales, the Mayor of the London borough of Newham. They have a photo of him being held back during one confrontation in July 2014, where he lost his temper with members of the group when they tried to approach him at the Mayor’s Newham Show. His behaviour was later found to have broken the borough’s code of conduct. The image of a public official so close to violence is a powerful one.

Robin Wales, Mayor of Newham, apparently being held back after being approached by members of FocusE15 in July 2014 (Photo: Evening Standard).

Photography does carry some risks for protesters. If you are photographed doing something illegal, then it can be used to help get you convicted. Police have been known to use photography to document activists and help them identify ‘troublemakers.’ In addition, photography arguably favours the dramatic, and not every form of protest is visually engaging. The boring, but very important, elements of social movements like fundraising and network building can easily get overlooked in a world that thrives on the dynamic and exciting. Social movements have very little, if any, control over how they are represented in the mainstream media, which is reflected in the frequent use of alternative media, controlled and operated by activists themselves (Feigenbaum, Frenzel and McCurdy 2013). 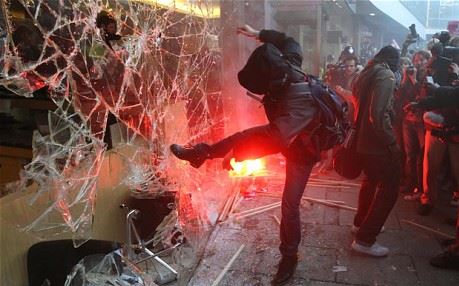 Images of violence during the 2010 tuition fee protests were commonly used by the mainstream media the protests’ aftermath (Photo: Dominic Lipinski/PA).

Photography is a double edged sword for protest movements. It provides a fast and effective way of capturing protests and spreading their message far beyond what would otherwise be possible. However, photography also poses a risk for protesters who act outside of the law, potentially providing evidence that could get them convicted.