Last week, I was lucky enough to run my Rebellious New York project on the Royal Holloway Geography Department’s second year undergraduate field trip for a second year. I really enjoyed it last year, getting to explore New York’s radical side with a group of enthusiastic students, and this trip was no different. I wrote about some of the many ways to explore New York’s turbulent past and present last year, but this time I discovered some new things, as well as revisiting some old ones.

The Statue of Liberty, donated to America by the French people to commemorate the centenary of American Independence, is one of the most iconic symbols of New York City (Photo: Hannah Awcock).

I took my group on the Occupy Walking Tour with Occupy member Michael Pellagatti, as I did last year. Michael has added some information to the tour that puts the 2008 global financial meltdown that spawned the Occupy Movement in the context of the boom and bust cycle inherent to capitalism. We also had a talk at the Interference Archive, which provided an introduction to the archive and its collections. It is always useful to know why an archive you are working in was started, as it can help you to understand what sort of material might be present in the collections. The students all found something useful for their projects, and the volunteers were very helpful in pointing out potentially relevant material- a great illustration of how beneficial it can be to have the archivist on your side! 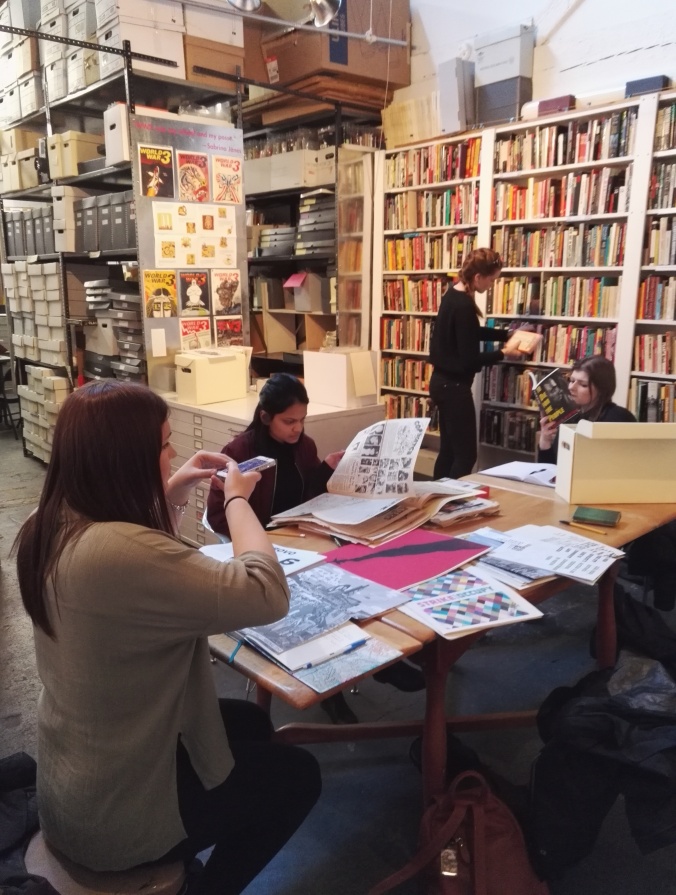 My group getting stuck in to the collections at the Interference Archive (Photo: Hannah Awcock).

The weather was much warmer than it has been on my previous trips to New York, and it was lovely to see the open spaces of the city being used and enjoyed. Union Square Park seemed to be a particularly lively space, with people dancing, drawing, performing and protesting at the south end of the park on the Wednesday evening when we were there. Whilst walking tours and archives are excellent, protest is best experienced by actually experiencing it, and in New York there is no shortage of opportunities! 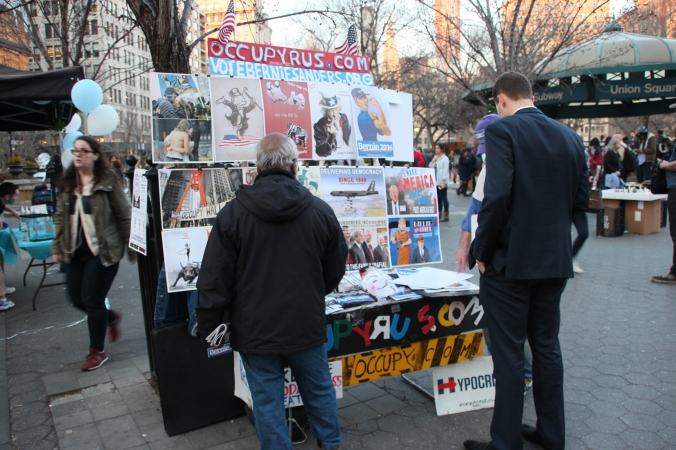 This stall was selling posters and t-shirts with a clear anti-establishment theme (Photo: Hannah Awcock). 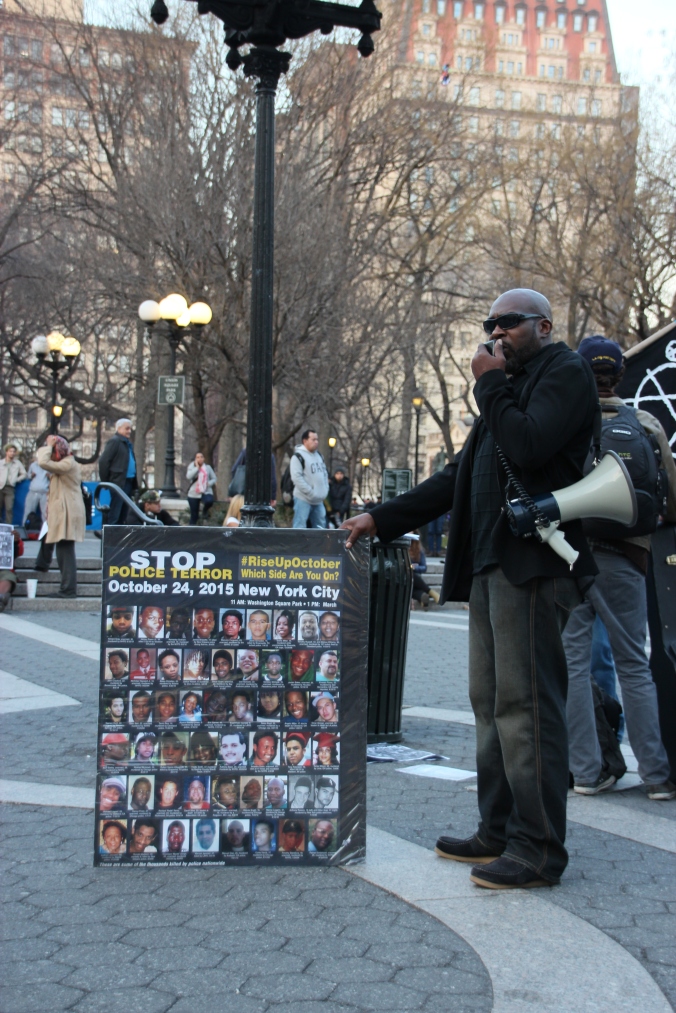 Police violence against civilians, particularly those belonging to ethnic minorities, is a controversial topic in America at the moment (Photo: Hannah Awcock).

It takes all sorts to make up a political campaign! (Photo: Hannah Awcock).

I spent some time on this trip exploring the rich history of immigration that is an integral part of New York. I visited Ellis Island, which processed 12 million newly arrived immigrants between 1892 and 1924. I also went to the Lower East Side Tenement Museum, which has preserved 97 Orchard Street, and has restored some of the flats to resemble what they would have looked like at various points between 1863 and the 1930s. Many immigrants crammed into tenements in neighbourhoods like the Lower East Side when they first arrived in America, and the museum does a fantastic job of bringing their stories to life. Immigrant groups did not wait long to get involved in politics in New York. Some of the biggest issues for new arrivals were work related; workers faced long hours, tough conditions and low wages. American workers often saw immigrants as competition, but they eventually realised that more could be achieved if they campaigned together. In addition, more established migrant groups helped new arrivals; German radicals helped eastern Europeans set up trade unions and Yiddish language newspapers when they first arrived on the Lower East Side. Radicals were also affected by the increasingly tight laws which aimed to reduce overall immigration numbers and prevent those considered subversive or unable to provide for themselves entering America. Anarchists were banned in 1903, along with epileptics and professional beggars. 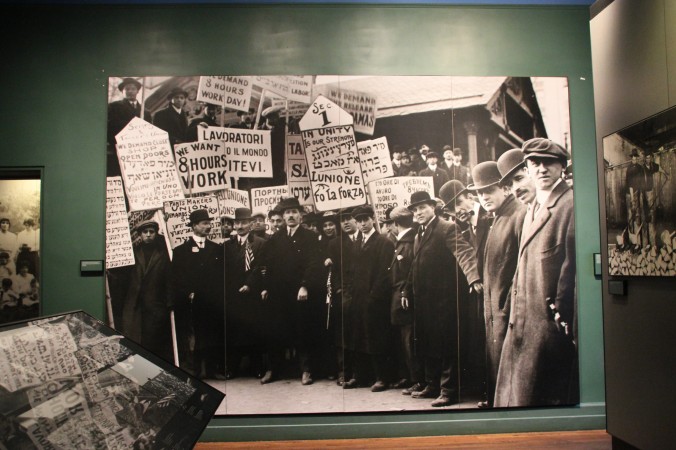 An image from the 1913 New York City clothing workers’ strike, with placards in Italian, Yiddish, and Russian as well as English. The museum on Ellis Island deals with all aspects of migrant life, including work (Photo: Hannah Awcock).

The Stonewall Riots are considered by many to be the the catalyst for the LGBT civil rights movement in America. On the 28th of June 1969 the police raided the Stonewall Inn, a popular gay bar in Greenwich Village. At this point homosexuality in public was illegal in New York, and businesses and establishments frequented by the city’s gay community were continually harassed by the police. This particular night was the final straw however, and a crowd gathered outside the Stonewall Inn and began to riot. The same happened the following night. On the first anniversary of the riots, the first Gay Pride parades took place in Los Angeles, San Francisco and New York. The original Inn closed in 1969, but a bar called Stonewall opened up in the western half of the original location (53 Christopher Street) in 1990. In 2007 the name was changed again to the Stonewall Inn, and this bar is still open today. Across the road in Christopher Park is the Gay Liberation Monument, which was constructed in 1992. Although it memorialises the gay rights movement as a whole, the location of the monument so close to the Stonewall Inn demonstrates how significant the location is considered to be. 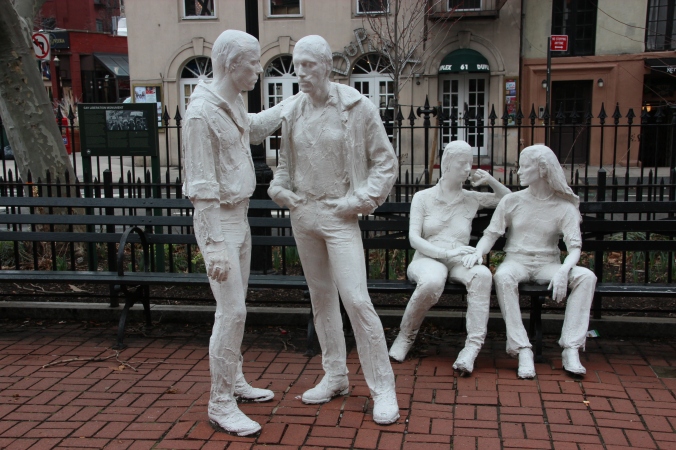 Detail of the two male figures. A plaque, which explains the context of the riots and the history of the memorial, can be seen in the background (Photo: Hannah Awcock). 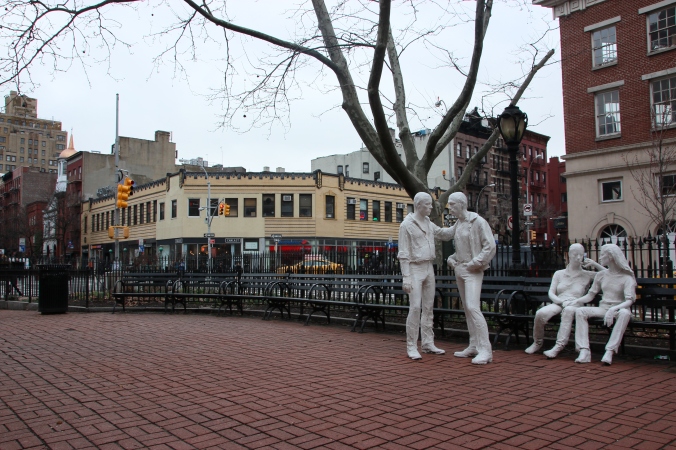 Christopher Park itself is small and quiet, but very close to the busy 7th Avenue, and I saw a lot of people coming in to look at memorial during the 20 minutes I was sat there (Photo: Hannah Awcock).

The radical history of New York is long and diverse, and it would take far more time than I have to get to know it properly, although I would like to someday. For now, I am content with exploring the traces these turbulent events and people have left in the fabric of the city on my brief visits, not to mention helping the wonderful Royal Holloway Geography undergraduates to conduct their own research on protest in the city. If you ever find yourself in this fantastic city, why not take some time to investigate the city’s rebellious side?

2 thoughts on “Rebellious New York: A Radical Guide to NYC 2”