There is a tendency today to see terrorism as some modern aberration, something that has arisen in recent years and might with luck fade away in time. This is unlikely. Terrorism of different sorts has been a constant backdrop in British history for centuries; it is likely to remain so for centuries to come. The notion that increased vigilance on the part of the public, combined with wise and good laws passed by Parliament, might one day defeat terrorism and usher in a peaceful era, where nobody needs to worry about bombs and assassinations, is a chimera.

As far as most people are concerned, Guy Fawke’s plot, the IRA bombings of the 1970s and 7/7 are probably the only examples of terrorism in London. In Dynamite, Treason and Plot: Terrorism in Victorian and Edwardian London, Simon Webb sets out to correct that misconception. From the Clerkenwell Outrage, where 12 people were killed in a Fenian prison break gone wrong; to the Tottenham Outrage (not every event is known as an Outrage, I promise!), a chase that lasted several hours and involved the hijacking of a tram and a milk cart, the stories Webb tells range from the horrific to the downright farcical.

Arguably the biggest strength of Dynamite, Treason and Plot is the emphasis on continuity. Humans have a tendency to believe that everything that happens is new, that the problems faced by modern society are unique to our time. Webb proves the inaccuracy of this belief, demonstrating that not only terrorism, but also immigration and xenophobia, are issues that the people of London have been grappling with for centuries. Irish, Jewish, and more recently Muslim; many minorities have been the subject of fear and discrimination in the city, and terrorism has frequently exacerbated the tensions.

Another of the strengths of Dynamite, Treason and Plot is Webb’s approach to terrorism itself. Webb doesn’t condemn the terrorists he describes outright, but neither does he glorify them. The first chapter of the book is devoted to discussion of the theories and motivations behind terrorism. It is not necessarily the mindless, monstrous violence which it is often portrayed as-there are particular reasons why people choose to resort to terrorism-and Webb takes them into account. Terrorism is an emotive subject, difficult to deal with in a sensitive and balanced way, but I think Webb does a good job of this.

Webb’s writing style can be repetitive; he frequently makes the same point twice in quick succession, and he often says how it was “nothing short of a miracle” that more people weren’t killed or injured in the events he recounts. He makes assertions, making a point without providing any supporting evidence, and often overlooks some of the historical controversies and debates. For example, in the chapter about the Suffragettes, Webb mentions the alleged plot to assassinate David Lloyd George by the Wheeldon family. In Dynamite, Treason and Plot it appears there is no doubt that that is what actually happened, but in To End all Wars by Adam Hochschild the event appears much more complicated. Hochschild suggests that the whole thing may have been a set-up, the plot concocted by the government to harm the opposition to the First World War, of which the Wheeldon family was a part. Whatever the truth, Webb completely ignores the debate, and as such misses out on some of the nuances of the story.

Despite the shortfalls I think Dynamite, Treason and Plot is well worth a read. It is an engaging read that deals with some of London’s darker, overlooked history. Webb puts terrorist into political and social context, rather than treating it as an isolated and inexplicable phenomenon to be instantly condemned.

Clerkenwell has been the focus of a large amount of turbulence over its history, even for an area of London. During the Peasant’s Revolt in 1381 the priory of St. John was burnt down because of its wealth and connections with Sir Robert Hales, a hated tax collector. Lenin moved into 37a Clerkenwell Green in 1902, and published 16 issues of Iskra, a pre-Bolskevik newspaper from there. The house is now the Marx Memorial Library. The area has also harboured religious nonconformists, such as the Lollards and early Methodists. Clerkenwell Green, historically an open, grassy area, has played host to many political meetings and demonstrations, some more peaceful than others. But on the 13th December 1867, Clerkenwell was rocked by an explosion that shocked even this contentious neighbourhood. 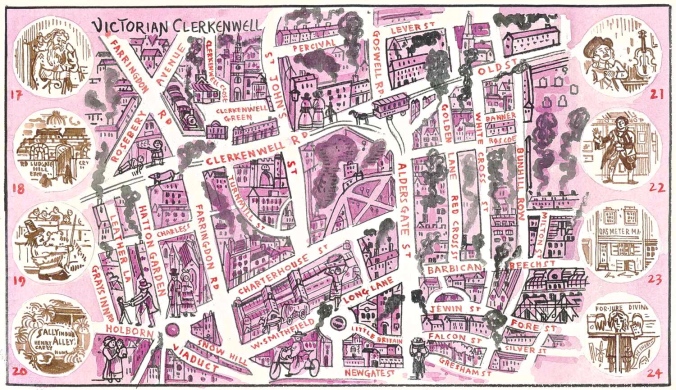 A map of Victorian Clerkenwell, drawn by Adam Dant for Spitalfields Life.

The story begins in America in 1858. A group of Irish expatriates founded a secret society called the Irish Republican Brotherhood, known to most as the Fenians. Their aim was to free Ireland from British rule by any means necessary, including attacks on the British establishment in Ireland, other colonies, and even the mainland itself. By the middle of the 1860s, there were Fenian groups in Soho and Finsbury. By 1867, they were proving quite troublesome to the authorities. After a failed attempt to steal over 10,000 rifles from Chester Castle in February to arm an Irish uprising and the breakout of two prominent Fenians from a prison van in Manchester that resulted in the death of a Police Sergeant in September, tensions were running high. 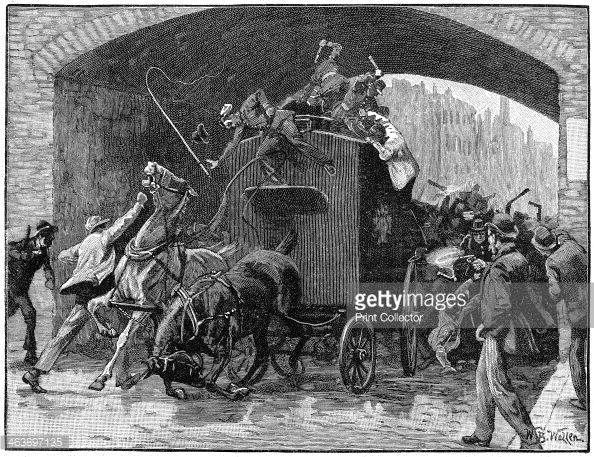 An image showing two Fenian leaders being broken out of a prison transport van in 1867 in Manchester (Source: Getty Images).

Richard O’Sullivan-Burke was largely thought to be the man who led the Manchester prison van breakout. He was arrested in London in November along with another man called Joseph Casey. To avoid a repeat of Manchester the men were quickly transferred to the Clerkenwell House of Detention, just to the North of Clerkenwell Road. The prison was formidable, surrounded by a wall 25ft high and over 2ft thick. The men obviously had friends in London—every day cooked food was brought to them by a woman named Anne Justice, and rumours of an escape attempt soon reached the authorities.

Extra guards and uniformed police were posted in and around the prison in response to the warning. Despite this, an attempt was made to break out O’Sullivan-Burke and Casey on the 12th of December. A man wheeled a large barrel up the prison wall by the exercise yard, and attempted to light a fuse on the barrel twice before he gave up, and wheeled the barrow off. A policeman watched the entire thing, but did not think it suspicious. The next day, another, similar attempt was made. This time, a firework was used as a fuse, and it turned out to be much more reliable. The resulting explosion was heard all over London. It levelled 60ft of the prison wall, and the front of a row of houses across the street in Corporation Row. 12 people were killed, and 120 others were injured.

Engravings of the Clerkenwell bombing from the ‘Illustrated Police News’.

“Britain’s first terrorist bombing” (Webb, 2012; p53) was an unmitigated disaster. Because of the failed attempt the day before the prisoners were not even in the exercise yard at the time of the explosion. Which was lucky in a way, as the Fenians had used far too much gunpowder (548lbs of it to be exact), and the explosion would have killed anyone in the yard. It sparked hysteria across the capital; it was said that twenty babies were killed in the womb by the blast, and that the explosion was a signal to begin a whole wave of terrorist attacks across the city. There were calls for new laws and emergency powers which would not be unfamiliar to us today. Any sympathy that there had been for the Irish cause amongst Londoners evaporated, and the government set up the first Secret Service Department, with the goal of gathering intelligence and anticipating future Fenian attacks. It was the forerunner of today’s Special branch and MI5. 5 people were charged with murder, including Anne Justice, but a man named Michael Barrett was the only one convicted. He has the dubious distinction of being the last person to ever be publicly executed in Britain.

Sadly, London is no stranger to terrorism. The Clerkenwell Outrage may have been Britain’s first terrorist bombing, but it was not the first terrorist plot, with conspiracies going back as far as the 1605 Gunpowder Plot and beyond.  In light of everything that has been going on recently, it can be helpful to remember that this is not the first time London has faced vague and shadowy threats; the city has always continued to survive and thrive.

Turbulent Londoners is a series of posts about radical individuals in London’s history who contributed to the city’s contentious past. My definition of ‘Londoner’ is quite loose, anyone who has played a role in protest in the city can be included. Any suggestions for future Turbulent Londoners posts are very welcome. Next up is Muriel Lester, a social reformer and pacifist.

Muriel Lester was a social reformer, pacifist, feminist and non-conformist. Like Charlotte Despard, she turned away from her privileged life, dedicating herself to helping the poor and advocating peace. Born in Leytonstone on the 8th of February 1883 to a wealthy Baptist family, by the time of her death aged 83 she had travelled the world, founded a social centre that still exists today, and been nominated for the Nobel Peace Prize. Twice.

Muriel moved to Bow in East London with her sister Doris in 1908. At the start of the twentieth century the East End was crowded and very poor. Many middle- and upper-class humanitarians were embarking on charitable projects in the area around this time, such as the lesser-known Pankhurst daughter Sylvia. In 1915, with money from their father, the Lester sisters bought a disused chapel and opened it as a ‘teetotal pub’, so that local people could have a place to meet in the evenings. They named it Kingsley Hall, after their brother who had died the previous year.

Between 1922 and 1926 Muriel was an Alderman on the radical Poplar Borough Council, and she chaired the Maternal and Child Welfare Committee. In 1928 a new purpose-built Kingsley Hall was designed as a community centre and place of worship. Muriel herself took on the role of vicar. Her spirituality was an important part of her campaigning throughout her life. In 1929 Muriel and Doris set up a second Kingsley Hall in Dagenham, where many Bow residents had been relocated after huge slum clearance programmes in the East End. Both Halls are still going strong today. 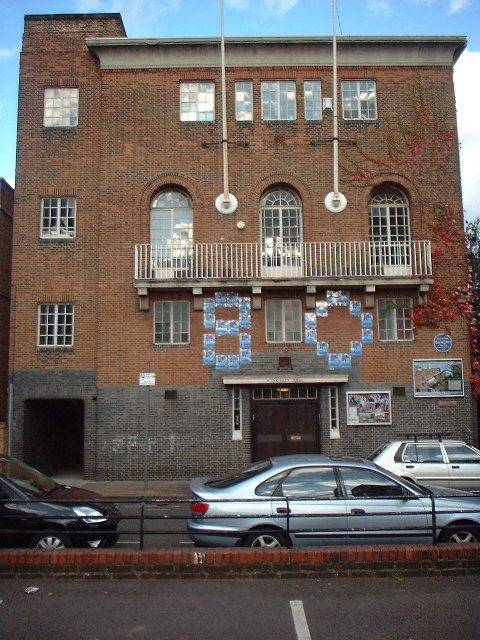 But community work in the East End was not the only way in which Muriel tried to make the world a better place. She was also a dedicated pacifist, and in 1914 was a founding member of the Fellowship of Reconciliation (FoR), a Christian Pacifist organisation which is also still active today. In 1926 she travelled to India and met Gandhi, with whom she developed a strong friendship. When he travelled to London for a conference in 1931, he stayed at the Kingsley Hall in Bow.

In 1934, Muriel began working as a secretary for the International FoR. She travelled the world spreading the message of non-violence. During a trip to Japan she was dubbed the ‘Mother of World Peace’, and she was detained in Trinidad in 1941 because of the success of her pacifist speeches in the US.

Muriel Lester was a woman who never stopped trying to help people. This mission continued even in death, as her body was donated to science. She used her privilege to benefit others, and demonstrated incredible bravery by taking the unpopular and frequently dangerous position of pacifist during two world wars. I make a point of featuring admirable women in the Turbulent Londoners series, and Muriel Lester would certainly make a good role model for any young woman.