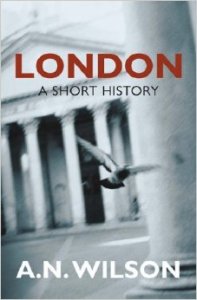 An architectural tour of London is… so much more than merely and aesthetic experience. It is a personal encounter with Londoners of the past. Every district of London…is haunted by memories. The past and the present are always blended here.
(Wilson, 2005; p.146)

When I saw London-A Short History on the shelf in the bookshop, I had to buy it. The book is slim, and smaller than A5, and I had to see how the entire 2,000+ year history of London could possibly fit within it. A.N. Wilson takes the reader on a whistle-stop tour of the metropolis’ past, with an emphasis on the city’s architecture. I personally find his disdain for modern London hard to forgive, but nonetheless Wilson does a satisfactory job of fitting London’s vast history into just 166 small pages.

Perhaps the book’s most distinguishing feature is its brevity. Wilson’s account necessarily sticks to the most significant events in London’s history, and to say he is brief is putting it mildly; he spends just five pages on Tudor and Stuart London, for example. A disproportionate amount of pages are devoted to the city’s recent past, the last 100 years takes up around half the book. Each chapter is structured in a similar way, with a description of social, cultural and economic factors before turning to the architecture of the relevant period. Wilson also focuses on the great men (and they are overwhelmingly male) that he feels shaped London and the way it is perceived; Samuel Pepys, Charles Dickens, John Nash and Winston Churchill amongst others.

Look down upon London, as we did at the beginning of this chapter, from Hampstead Heath and a great splurge of needlessly dreary buildings spreads itself at your feet: hospitals, schools, roads, blocks of flats everywhere from the Isle of Dogs to Chiswick, from Hampstead to Sydenham—badly executed, badly designed and ugly, ugly, ugly.
(Wilson, 2005; p.11)

Reading this book, I discovered that I see London in a similar way to a close relative; I’m allowed to complain about it, but nobody else is. As far as Wilson is concerned, London has been going downhill since the end of World War II, ruined by modernist architecture, international capitalism and tourism. Unfortunately this attitude quickly influenced my perceptions of this book and Wilson’s writing. He argues that “much of modern London looks hideous by day, especially by wet day” (Wilson, 2005; p. 138). I don’t pretend to know much about architecture and aesthetics, but I think that is unnecessarily harsh. London does have ugly parts, but what city doesn’t?

Not only does Wilson criticise the city’s looks, he also disdains its people, accusing them of “extraordinary idleness” (Wilson, 2005; p123). He argues Londoners spend their time shopping, eating out, and being entertained. The service industry is significant in London, but Wilson is completely ignoring the workers that staff these shops, restaurants, pubs, clubs, and theatres. Perhaps London isn’t full of stevedores and labourers any more, but the suggestion that Londoners don’t work hard is extremely misleading.

Wilson does have hope for our city. He celebrates the diversity and vibrancy created by generations of immigration, and admires the architecture of the Jubilee Line underground stations. But it’s not enough to redeem him in my eyes. If you can’t face Peter Ackroyd’s epic 822-page London- A Biography, then London-A Short History will do the job. Otherwise, in the view of this London-loving incomer, probably don’t bother.