Me outside the Museum of London Docklands, contributing to the #museumselfie Twitter hashtag (Photo: Hannah Awcock).

Soldiers and Suffragettes: The Photography of Christina Broom is a temporary exhibition at the Museum of London Docklands in Canary Wharf, open until Sunday the 1st of November. I went along because not only did Christina Broom photograph the campaign for female suffrage in the early twentieth century, she was also an impressive woman in her own right, as the first female British press photographer. The exhibition is worth checking out if you are interested in photography or social history, as well as the two main topics; Brooms photography of the suffrage movement and the armed forces.

Christina Broom was a small woman, and it must have been difficult to carry her heavy camera and equipment around (Source: Museum of London).

In 1903 at the age of 40, Christina Broom noticed the increasing popularity of postcards, and began photographing local views and events in order to produce her own. Her husband had never fully recovered from an injury acquired during a game of cricket, and she took up photography to provide for her family. For the next four decades Broom hauled her heavy camera and tripod back and forth across London documenting the city and its people. Soldiers and Suffragettes is the first exhibition devoted solely to Broom’s work, and aims to share her story so she can receive some of the appreciation she deserves.

Because of my own interests I was mostly drawn to Broom’s photos of the suffrage movement, but I also found her military photography engaging. Broom was trusted by the soldiers, and she photographed many before they left to take part in the First World War. The photos of soldiers with their families on the platforms at Waterloo Station are particularly moving. The knowledge that this might have been the last time the men ever saw their loved ones is haunting, and the fact that Broom was allowed to capture these significant moments is an indication of how good she was at her job. 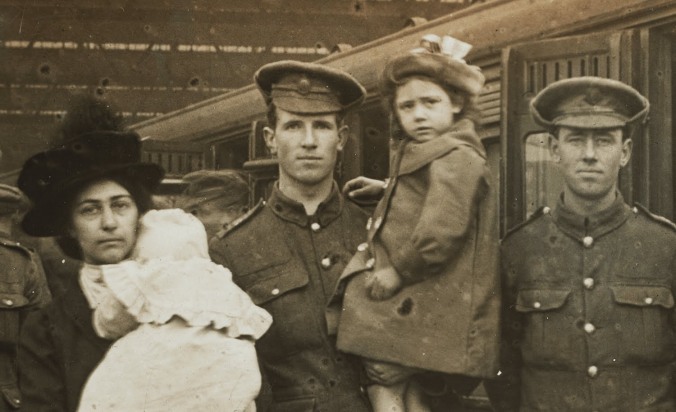 Broom photographed soldiers saying goodbye to their friends and family before leaving for the First World War. (Source: Museum of London).

Broom’s pictures of the suffrage campaign are wonderful. She photographed campaigners both famous (including the Pankhursts) and obscure, capturing the sheer number of people involved. It is easy to think that Emmeline and Christabel Pankhurst won the vote for women single-handed, but this is far from the case. Broom’s photos depict many of the organisations involved in the campaign, including the National Union of Women’s Suffrage Societies, and the Women’s Freedom League, led by the incredible Charlotte Despard.

The exhibition also highlights the economics of the suffrage campaign. Although a supporter of female suffrage, Broom’s main reason for photographing the movement was financial. Supporters of female suffrage would collect memorabilia, the proceeds of which helped to fund campaigning. The WSPU had their own shops, in which they sold everything from postcards like the ones Broom produced to tea sets designed by Sylvia Pankhurst. The exhibition also includes photos of fairs held by various suffrage groups. One of the purposes of these fairs was to raise money. For example, at the Women’s Exhibition in Knightsbridge in 1909, a replica prison cell was constructed. Visitors were charged 6d to see inside and hear about what life was like for suffragettes in prison. The economics of social movements is something that I think gets frequently overlooked, so it was good to see it so prominent in Soldiers and Suffragettes.

Christina Broom’s photograph of a suffragette dressed in a replica prison uniform at the Women’s Exhibition in May 1909 (Source: Museum of London).

Soldiers and Suffragettes is an exhibition that appeals on a whole range of levels. I even enjoyed the section about the technology of developing and printing the images- the backlit negatives of Broom’s photos were beautiful, making the Suffragettes look like vibrant ghosts. I would definitely recommend checking it out over the new few weeks before it closes.

Not only was Christina Broom a pioneer, leading the way for other female professional photographers, she was also very talented. Her images are moving and personal, as well as a fantastic record of a dynamic period in London’s history.

4 thoughts on “Soldiers and Suffragettes: The Photography of Christina Broom”