Turbulent Londoners is a series of posts about radical individuals in London’s history who contributed to the city’s contentious past. My definition of ‘Londoner’ is quite loose, anyone who has played a role in protest in the city can be included. Any suggestions for future Turbulent Londoners posts are very welcome. The next Turbulent Londoner is William Cuffay, a prominent Chartist leader and activist, despite significant disadvantages.

William Cuffay was the son of an ex-slave from St. Kitts and a woman from Kent. Born in 1788 in Medway Towns (now Gillingham), he trained as a tailor and moved to London in about 1819. He married 3 times, and had 1 daughter. Despite being mixed race, less than 5 feet tall and disabled (he had a deformed spine and shinbones), Cuffay became a well-known, daring, respected and committed activist and Chartist leader, to the extent that The Times described the London Chartists as “the black man and his party.”

Cuffay came to activism relatively late in life. In 1834, when he was 36, he was fired and blacklisted after taking part in a tailors’ strike for shorter hours and better pay. This experience convinced him that workers needed representation in Parliament, so got involved in the Chartist movement. 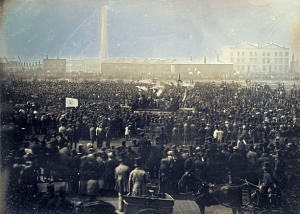 The Chartist demonstration on Kennington Common, which is largely credited as being the death knell of the movement (Source: Wikipedia).

Cuffay was a Physical Force Chartist. They advocated the use of violence for their cause, whilst the Moral Force Chartists believed they could achieve their goals with only the weight of their arguments. Cuffay helped to organise the fateful Chartist demonstration on Kennington Common on the 10th of April 1848, and was dismayed by what he saw as the cowardly behaviour of his fellow Chartist leaders. The Kennington demonstration was supposed to be the crowning glory of the Chartist movement, but instead the leaders decided to back down because of the huge numbers of police.

Now utterly convinced that peaceful protest would not get the People’s Charter into law, Cuffay became involved in plans for a violent uprising. He was betrayed by a government spy and convicted of preparing acts of arson- the fires were to meant to signal the start of the rebellion. The affair became known as The Orange Tree Plot, after the pub in Red Lion Square where the leaders of the uprising would meet to plan.

A copy of ‘The Poetical Works of Lord Byron’ given to Cuffay by his friends in the Westminster Chartist Association when he was transported to Tasmania. He still had the book when he died, 20 years later (Source: William Cuffay, 1778-1870).

Cuffay was convicted and sentenced to 21 years penal transportation. He arrived in Tasmania in November 1849, after what must have been a truly awful sea journey for a 61-year-old with Cuffay’s health problems. He was pardoned after 3 years, but chose to stay in Tasmania. His wife saved enough money to join him in 1853, and he carried on pretty much as he left off in London, working as a tailor and playing a prominent role in local radical politics. He sadly died in poverty in July 1870, aged 82.

William Cuffay was a man who would not be defined by his colour or physical attributes. Despite being only 4 ft 11, he was known as a charismatic and engaging public speaker, and he quickly became one of the best-known Chartist leaders. He was admired by his fellow Chartists, and fought with conviction for what he believed was right. As far as I know, there are no memorials for Cuffay, in London or Tasmania, but I think he was a man we could all learn a few lessons from.