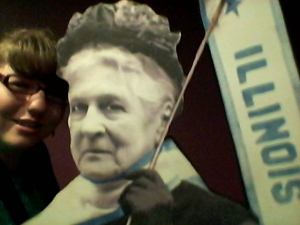 A selfie with an Illinois suffragette in the Facing Freedom exhibition at the Chicago History Museum (Photo: Hannah Awcock).

A few weeks ago I went to the Annual Meeting of the Association of American Geographers in Chicago. Amongst all the geography-ing I had some time to look around the city, and I spent a really enjoyable morning in the Chicago History Museum. Like any other city, Chicago has a history of riots and protest, and some of this history is represented in the museum. There are two main areas in which protest is represented in the museum’s permanent exhibits. The first is Facing Freedom, which explores the concept of freedom and how it has been negotiated, fought for and denied in America’s recent history. The second is Chicago: Crossroads of America, which narrates the city’s history through a series of themed galleries. 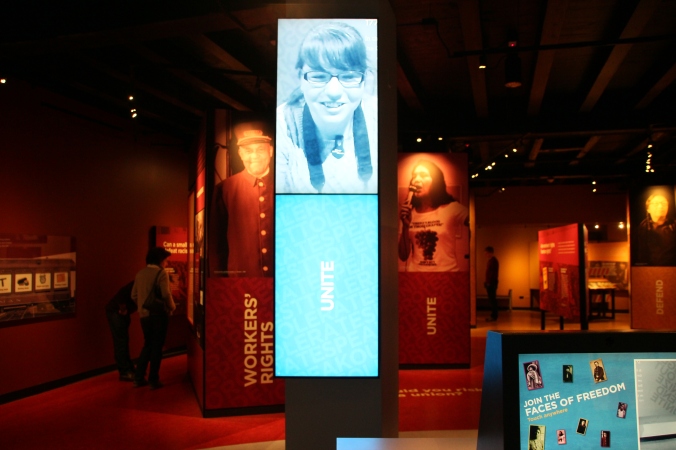 The Facing Freedom exhibition has an interactive element where visitors can become part of the exhibit (Photo: Hannah Awcock).

A hat worn by Illinois suffragists at a national march in Washington DC in 1913 in the Facing Freedom Exhibition (Photo: Hannah Awcock).

The Facing Freedom exhibition examines the relationship between the United States of America and freedom, which has been patchy to say the least. Slavery, Japanese internment camps during WW2 and the treatment of Native Americans are all covered, but of course what interests me most are the protests and social movements.  The exhibition features the Brotherhood of Sleeping Car Porter’s in the 1920s-30s, the United Farm Workers in the 1960s, the Chicago school boycott in 1963, and the Illinois suffragists movement in the early 1900s. All of these movements and groups were successful to a greater or lesser extent; nothing was featured that didn’t achieve at least some of their goals. In this way these social movements, people who fought and won for freedom, are counter posed with those who had their freedom taken from them, the Japanese-Americans, slaves and Native Americans. The general message of the gallery is that freedom must be fought for and protected, and protest is positioned as a necessary part of that process. 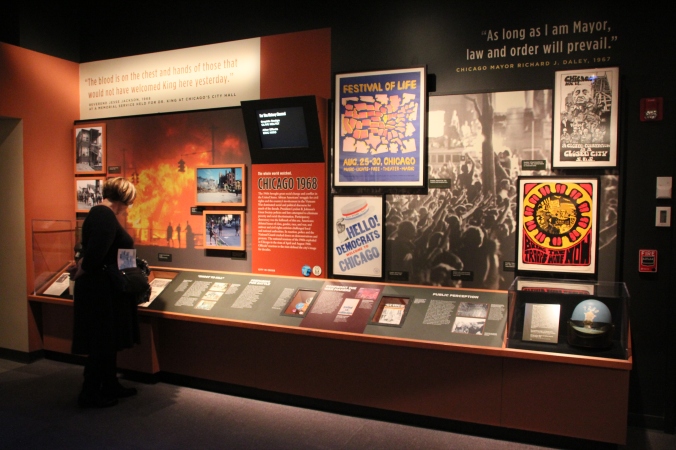 The riots during the 1968 Democratic National convention are portrayed as a negative event, the divisive legacies of which can still be found in Chicago today (Photo: Hannah Awcock).

Artefacts displayed in the Chicago and Crisis gallery from the Haymarket Affair. 4 anarchists were hanged and another 4 imprisoned based on very little evidence after a bomb went off at a protest. (Source: Chicago History Museum).

In contrast, protest is represented in a more negative light in the Chicago: Crossroads of America exhibition. 3 protests are depicted in the Chicago in Crisis gallery: the Haymarket Affair, the 1919 Race Riots, and the Democratic National Convention riots in 1968. Along with the 1871 Great Fire that destroyed huge swathes of the city, the Gangland Era, and the sinking of the passenger ship the SS Eastland in which 844 people died, these protests are represented as turning points in the history of Chicago; negative experiences which the city dealt with with varying degrees of success. In this gallery, protest is not viewed as a positive, or even a necessary evil. The understanding of protest represented here is fundamentally at odds with that of the Facing Freedom exhibition.

In Chicago’s complex urban environment, powerful economic, social and political forces converge and collide, creating tensions that periodically explode into crisis. Chicago’s greatest crises include the Great Fire of 1871, the Haymarket Affair, the 1919 Race Riot, the Gangland Era, and the West Side and Democratic National Convention riots in 1968.

Chicago’s response to each crisis shaped its identity. A triumphant recovery from fire earned Chicago the “I Will” motto, but its failure to heal racial divisions following the 1919 and 1968 riots fostered segregation that plagued the city. Likewise, Chicago’s reputation for gangland violence continues, despite the bootlegger’s demise.

Text from the Chicago in Crisis gallery, Chicago History Museum

These 2 exhibitions demonstrate how protests can be interpreted in different ways. In this age of mass media and instant news, the way that a protest is viewed by people removed from the event itself is crucial. The presence of positive and negative representations of protest within the same museum illustrate the richness involved in thinking about how protests are perceived, and hints at the complexity of museum geographies. Next time you see a protest represented in a museum, trying thinking about some of these issues. And if you’ve ever in Chicago, the Chicago History Museum is well worth a visit (it is also close to Lincoln Park Zoo, one of the oldest zoo’s in America, and free to get in, although a little dreary on a cold April day!)

One thought on “Turbulent Chicago: Representations of Protest at the Chicago History Museum”