Protest has a complicated relationship with mainstream politics. Governments and political parties are frequently the targets of social movements and demonstrations, such as the recent Anti-government protests after the 2015 General Election. Political parties and politicians often appear as the subject of protests stickers. In London, the frequency of these kind of stickers increased in the weeks before the recent General Election. Generally, the streets of London did not agree with Britain’s voters. 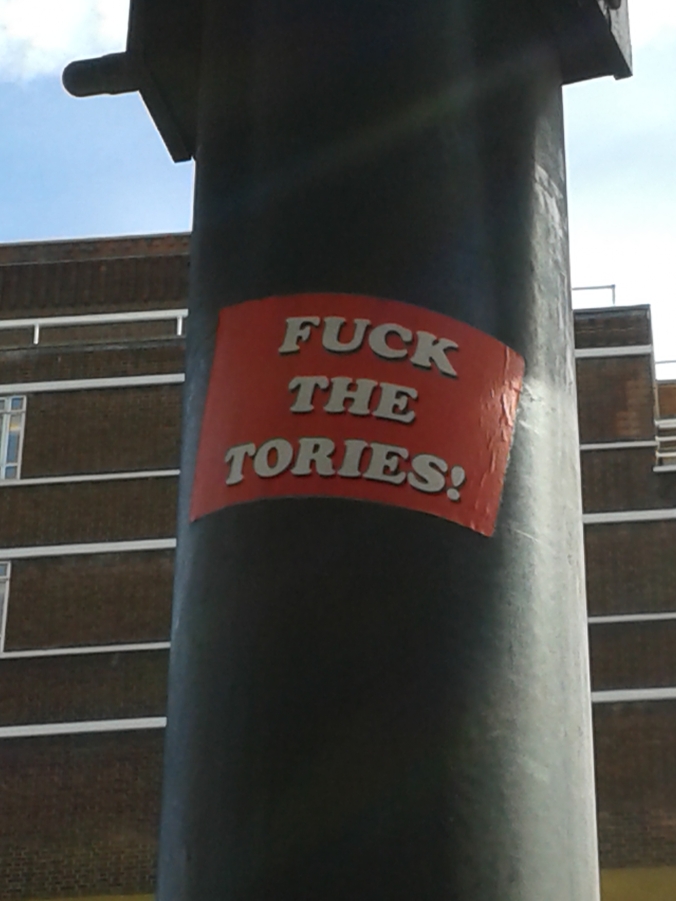 There was a decidedly anti-Conservative tone of many of the protest stickers that appeared in the weeks before the 2015 General Election (Tottenham Court Road, 17/04/15). 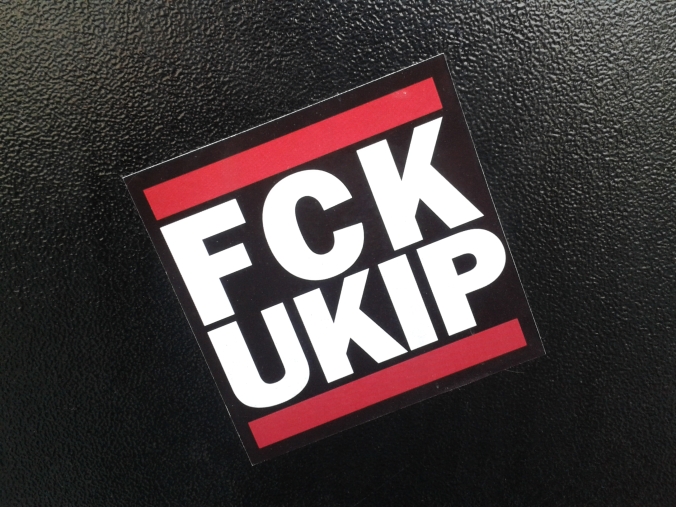 UKIP also received a certain amount of criticism on the streets of London, although it then went on to win 12.6% of the vote (Gordon Street, Bloomsbury, 17/04/15). 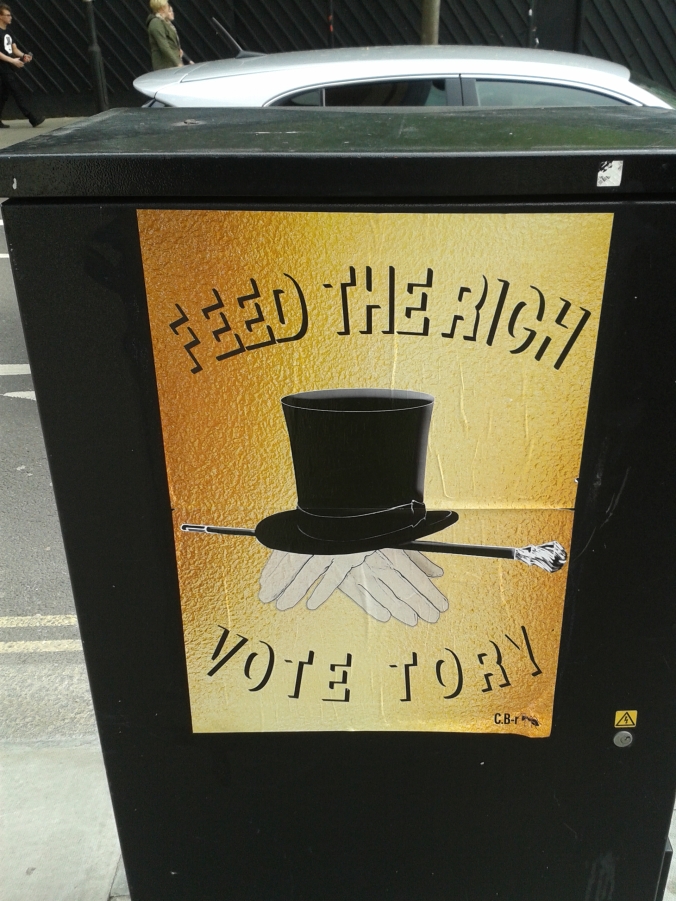 This example, more of a poster than a sticker really, directly referenced the election (New Oxford Street, Holborn, 03/05/15).

These stickers criticized the electoral system as a whole rather than specific politic parties. They had been removed the next day (Borough High Street, 28/04/15).

A sticker calling for Muslims not to vote. Some argue that voting is polytheism, because no one has the right to make laws except God. The sticker has an official appearance, looking more like a warning sign than a protest sticker (Euston Station, 12/05/15).

This sticker, by the Anarchist Federation, is also calling for people not to vote, although I’m sure the motive was very different. This sticker was located on a bin, which might have been an attempt to equate voting with rubbish. Or it might have been a coincidence (Camden High Street, 20/05/15). 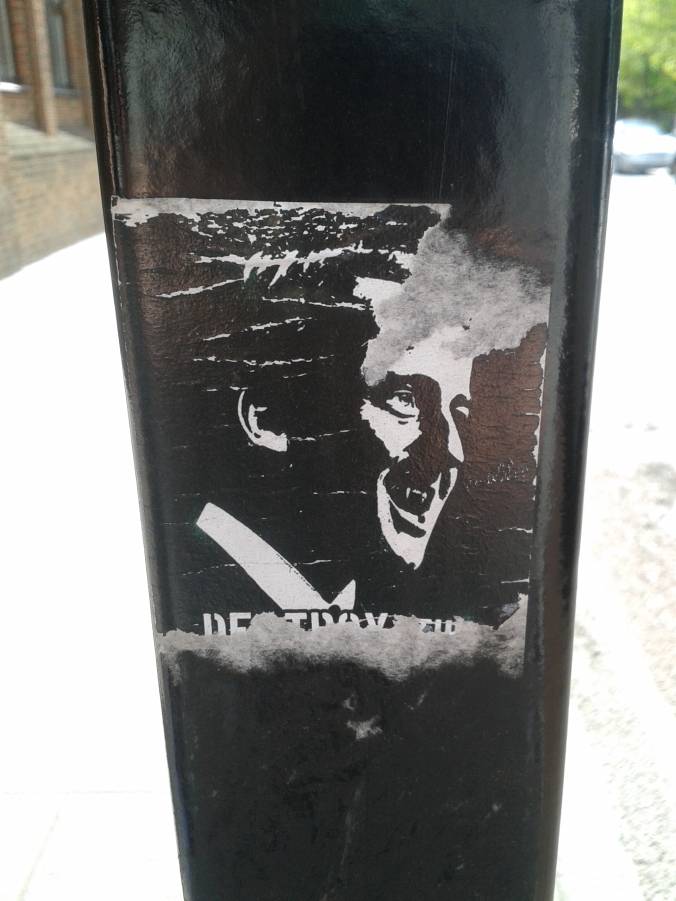 The writing on this sticker has been removed, but the image of David Cameron with vampiric teeth gets the message across I think! (Borough High Street, 28/04/15).

This sticker, along with the next one, rank amongst my favourite stickers that I’ve come across so far in London. Avengers: Age of Ultron was released in UK cinemas on the 23rd of April, so the reference is topical as well as humorous (New Oxford Street, Holborn, 03/05/15).

Not to be left out, Nigel Farage also gets the Avengers treatment (New Oxford Street, Holborn, 03/05/15).

This sticker is another criticism of UKIP, but it has been grafittied, accusing the person who made the sticker of bigotry (Regent’s Canal tow path, Camden, 20/05/15). 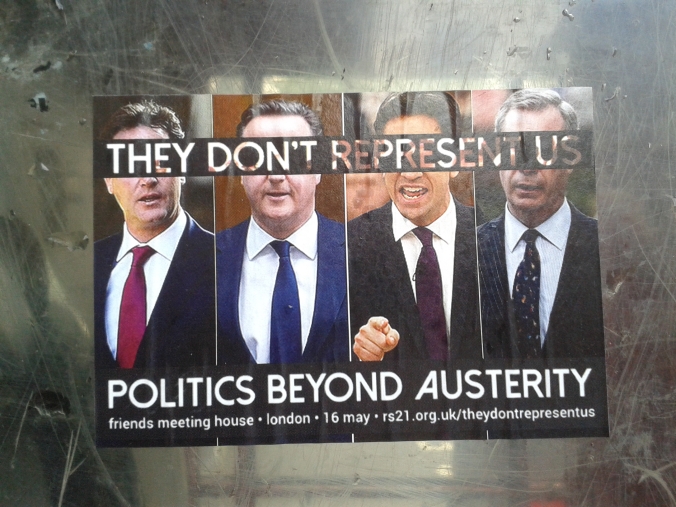 Many people are disillusioned with the political system, and feel like the current political parties do not offer real choice. They all argue that there is a need for continued austerity, for example. This sticker is referring to that sense of disillusionment (Euston Road, 06/05/15).