WordPress.com has very helpfully put together a summary of Turbulent London’s stats from 2014. The blog has only been going since July, and I am very proud of what it has achieved in that time. I had been wanting to start a blog based around my PhD, for some time, but had got stuck trying to think of a name. Once I finally got Turbulent London up and running however, I discovered that blogging is an exciting and dynamic means of communication which has been greatly beneficial to me, as well as thoroughly enjoyable.

As the summary shows, people in 41 countries have read Turbulent London, which is  just amazing to me. I get a buzz of excitement every time I see that someone from Finland, Iraq, or Algeria has read my writing. Closer to home, I am always humbled when one of my friends, colleagues or fellow PhD students tell me that they read and enjoyed a post.

I am aware that this may be coming across as overly emotional or self-promoting, but really I just wanted to take this opportunity to share my enjoyment of Turbulent London, and to thank everyone for taking the time to read and engage with my posts. Also, if you have been considering starting a blog yourself, I strongly advise you do it, because it is fantastic.

I hope you all had a lovely Christmas, and I wish you all the best for 2015.

A San Francisco cable car holds 60 people. This blog was viewed about 1,600 times in 2014. If it were a cable car, it would take about 27 trips to carry that many people. 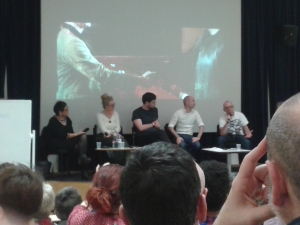 The Pits and Perverts Revisited panel.

Last Friday, I went to an event at Birkbeck College called Pits and Perverts Revisited: ‘Pride’ the Movie and Politics Now. It is almost exactly 30 years since the Pits and Perverts fundraiser in Camden was organised for the striking miners by Lesbians and Gays Support the Miners, the group depicted in this year’s hit film, Pride. This event was a reflection on the film and LGSM itself, with Mike Jackson and Siân James speaking, upon whom characters in the film were based. It included a screening of the documentary All Out! Dancing in Dulais and a panel discussion also featuring Diarmaid Kelliher (a PhD student at the University of Glasgow working on solidarity groups for the miners in London), and Bev Skeggs (a professor of Sociology at Goldsmiths). All Out was made in 1986, and is about the work that LGSM did for the miners. It was a great evening full of passionate discussion, which raised a lot of interesting points.

The key thing that really came home to me during the course of the evening was the importance of solidarity to protest movements. The point was made in All Out that it is illogical to fight for the right of one oppressed group or minority but not others. Solidarity can take many forms, from a declaration of support to volunteers to help man the picket lines, but all types are important. There is a long tradition of solidarity amongst social movements in Britain, for example miners from across the country joined the Grunwick strike on the picket line in the 1970s. However there is also a tradition of groups not receiving the support they need, for example many of the big trade union’s attitudes to women workers. Solidarity between different protest movements is still not a given, but as Pride demonstrates, it can be an invaluable and incredibly beneficial experience.

Another important characteristic of social movements that was emphasised was networks. Exchanging solidarity with other groups involves making connections, sharing knowledge, resources and experience. Several of the speakers emphasised the importance of making connections with other movements and activists, particularly internationally as many of the issues campaigned on now have international causes and implications. Academic geographers frequently analyse social movements from the perspective of networks, and it was nice to know that this is a legitimate perspective to take.

The final thing that came out of the discussion that I think is really important to emphasise is the necessity of fundraising. The main things that LGSM did in support of the miners were collections and fundraisers. At the height of the strike the Neath, Dulais and Swansea Valleys Miners Support Group needed £5-8000 per week to feed 1000 mining families. These funds were essential for the strike to continue, and without it, the miners would have had no choice but to return to work. Fundraising is not glamorous or exciting, but no campaign will last for long without some form of income.

The audience for Pits and Perverts Revisited was more mixed than your average academic seminar, which I think contributed to the vigour and practical nature of the discussion. The evening gave me a lot to think about. Pride is a fantastic film, funny and heart-warming, but it is also inspiring activism and discussion, which I think is a truly wonderful achievement. 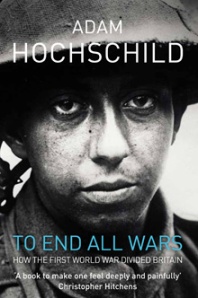 ‘To End All Wars’ by Adam Hochschild

By the time we reach the centenary of Armistice Day in 2018, I get the feeling that we might be suffering from a certain degree of World War 1 fatigue. The sheer number of  documentaries, dramatisations, books, ceremonies and art installations will likely make it difficult for any one thing to stand out. I think that To End All Wars by Adam Hochschild has a good chance of leaving a lasting impression.

The story of the first world war is familiar to most of us, but To End All Wars tells the narrative from an unfamiliar perspective; it is about those people who spoke out against the war. Opposition is not discussed in the traditional narratives of the war, the general perception appears to be that it wasn’t criticised until years afterwards. Admittedly critics of the war were few, tested as they were by the “mass patriotic hysteria” (Hochschild, 2011) but they most certainly did exist. On the 2nd of August 1914, there was a huge anti-war rally in Trafalgar Square, with calls for a general strike if war was declared. Prominent campaigners like Keir Hardie, Charlotte Despard and Sylvia Pankhurst continued to oppose the war, with Pankhurst proposing a Women’s Peace Expeditionary Force, where 1000 women would march into no-man’s land between the two armies.

Publicly criticising the war required a great deal of bravery. Those that did were almost instantly ostracised, derided or accused of treachery, labeled as German spies trying to undermine the war effort. Many paid a heavy price for their defiance. For example, the Wheeldon family, socialists who hid soldiers escaping conscription, were convicted in 1917 of the completely false charge of attempting to murder Lloyd George and another member of the war cabinet, victims of a government attempt to disgrace the anti-war movement. 3 family members were sentenced to 5-10 years hard labour after a sham trial that didn’t even last a week.

To End All Wars is arranged chronologically, making the tragic progress of the war appear even more inevitable as the reader can do absolutely nothing to prevent the horrors that we know full well are coming. The style of writing is dramatic, and the book often reads more like a novel than non-fiction. Charlotte Despard, the famous suffragette and anti-war campaigner, was actually the sister of John French, the Commander-in-Chief of the British Army until 1915. Hochschild hides this connection though, revealing it like a plot twist at the end of a chapter. The first chapter is spent introducing the key players in the book, developing them like characters. Whilst the approach felt a bit unusual at first, it makes for an engaging and accessible read.

Admittedly, Hochschild does spend a lot of time describing the events of the war, and whilst this is generally useful context, it does sometimes feel like filler, padding out the relatively rare examples of opposition to the war. However on balance this is a thoroughly enjoyable book, that provokes thought about the nature of war and opposition to it, as well as providing a rare new insight into the First World War.

Turbulent Londoners is a series of posts about radical individuals in London’s history who contributed to the city’s contentious past. My definition of ‘Londoner’ is quite loose, anyone who has played a role in protest in the city can be included. Any suggestions for future Turbulent Londoners posts are very welcome. The second Londoner to be profiled is Charlotte Despard, an inspirational pacifist, feminist and socialist campaigner.

Charlotte Despard was a prominent feminist and social campaigner in the late-nineteenth and early twentieth centuries, who fought for many causes during her long life. Born into a wealthy French family in Kent in 1844, she married in 1870. She was brought up as a young Victorian lady should be, and frequently railed against her lack of a proper education. After her husband died in 1890, she became a dedicated and inspiring campaigner, although she was well known for her simple black clothing for the rest of her life.

Despard organised and funded a health clinic, a soup kitchen for the unemployed and youth and working men’s clubs in the slum called Nine Elms in Battersea, London. Not content with mere philanthropy, she actually moved into the area, living amongst those she worked so hard to help. In 1894 she became a Poor Law Guardian in Lambeth, a job at which she excelled, using her position to care for the most vulnerable ‘paupers’.

Politically, Despard was an active supporter of the Social Democratic Party and the Independent Labour Party, running in the 1918 general election as a pacifist Labour candidate for Battersea. By the time the Women’s Social and Political Union moved to London in 1906, she was a well-known progressive speaker, and an obvious choice for an ally. She became the WSPU’s honorary secretary, and was imprisoned twice in 1907 for her actions as a suffragette, at the age of 63. However, later that year the Suffragette movement split, and Despard became President of the Women’s Freedom League, which unlike the WSPU was democratically organised and advocated a campaign of passive resistance.

Despard addressing an anti-fascist rally in the 1930’s, when she was in her nineties (Source: History Today)

Despard was a pacifist, opposing the Boer War and World War One, despite her brother, Sir John French, being the commander-in-chief of the British Expeditionary Force in France until 1915. The two remained close throughout the First World War, until Charlotte declared her support of Irish home rule and later independence. As the Lord Lieutenant of Ireland, Sir John French was tasked with trying to supress the very people she supported, and their previously close relationship suffered badly. In 1921 she moved to Ireland, where she continued to campaign for civil rights and the relief of poverty and distress. Despite her advanced years, she was classed as a dangerous subversive under the Irish Free State’s 1927 Public Safety Act. In 1933 her house in Dublin was attacked by an anti-communist mob.

As if all that wasn’t enough, Despard was also active in promoting a variety of other causes, including Save the Children, the Indian independence movement, theosophy, and the London Vegetarian Society. She died after a fall at the age of 95, but left behind an enduring legacy. Charlotte Despard was a confident, strong-willed, independent woman, who frequently defied convention and suffered hardship to fight for what she believed in. She is an inspiration.

Hochschild, Adam. To End All Wars: A Story of Protest and Patriotism in the First World War. London: Pan Books, 2011.