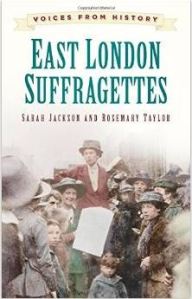 Voices from History: East London Suffragettes marks 100 years since the formation of the East London Federation of Suffragettes (ELFS), a group led by Sylvia Pankhurst which was asked to leave the Women’s Social and Political Union after they refused to toe the party line. Not content with  campaigning for female suffrage, this inspiring group of women worked to aid and empower the local community. They started a nursery, 3 ‘cost-price’ restaurants and a co-operative toy factory, as well as campaigning for a living wage and better housing. Voices from History is a brilliant account of these achievements and others.

Voices from History is aptly named, telling the story of the ELFS with the aid of numerous first-hand accounts. One of the aims of the book is to celebrate the work of everyone involved in the Federation, even if their names have now been forgotten. The extensive quotes from multiple contemporary sources does this well, highlighting that the achievements of the Federation were down to the efforts of hundreds of individuals, not just well known leaders like Sylvia Pankhurst.

The book is very well contextualised, with female activism in the East End of London both before and after the  ELFS being detailed. I think it is often easy to view groups like the Suffragettes as isolated and unusual incidents, but in fact that is most often not the case, and the structure of the book demonstrates that well. There is a long tradition of radical activism in the East End, and the book situates the ELFS within this history. The final chapter discusses women’s activism in the East End since the suffragettes, right up to the present day. I particularly liked this way of concluding the book, as it shows that the story is not in fact over; there are many more battles to be fought against poverty and inequality in the East End.

Any criticisms that I have are minor really. In the middle of the book there are some wonderful pictures that illustrate the story brilliantly, but I would prefer it if they were interspersed throughout the book, so that you don’t have to keep skipping back and forth to the relevant images. Also, I would have liked more information about the archives and sources used during the research for the book. Even just a few sentences about how and where the research was conducted would have been much appreciated.

Voices from History is a thoroughly enjoyable read about a fascinating period of radicalism in the history of the East End of London. I attended the launch of the book as part of the East London Suffragette Festival in August this year and it was clear that the project was a labour of love for the two authors. Their admiration of the East London Suffragettes, and their determination that the ELFS get the recognition it deserves, shines through the pages of the book. The reader can’t help but feel the same.